K-State sat with one final opportunity to improve its NCAA Tournament resume, however, West Virginia had other ideas for the Wildcats’ 2014 home finale.

While the conference slate is over, postseason play is still to come for K-State. Details will be announced for the location and Wildcats’ opponent tonight at 7:30 p.m.

The Wildcats were 6-1 in matches that went to five sets this season and undefeated in Manhattan.

Set one found both teams hitting fairly well with K-State hitting a respectable .320 percentage and West Virginia at .484. The two teams were tied early at three but West Virginia took a slight lead and held it throughout the majority of the match.

K-State got as close as one point, but a Mountaineer 4-0 run closed out the set and gave the visitors a 25-20 set win.

The Wildcats came out rolling in the second set and they took a commanding 10-3 lead. The sizable lead stuck for a good portion of the set, but West Virginia started chipping away.

The Mountaineers took away K-State’s lead after a 19-19 tie and did not relinquish it. West Virginia used the back part of their 11-2 run to close out the set 25-21 holding K-State to only .179 hitting.

In set three, West Virginia came within two at 13-11 but K-State’s defense, which held the Mountaineers to a negative hitting percentage in the set, only allowed three more points. Using a 12-3 scoring stretch, including a 8-0 run to close out the set, the Wildcats hit .385 to take the set 25-14.

Set four was kept extremely close with 13 ties and four lead changes. The Mountaineers tied it up last at 20, but K-State went on a 5-1 run to send it to a 15-point fifth set.

K-State hit a respectable .244 in the set, but it was the Wildcats defense that made the difference holding West Virginia to a .096 hitting percentage.

Set five was not a run away for West Virginia, but they did slowly slip away.

K-State was able to tie it up at six before the Mountaineers were able to create some separation. West Virginia out hit K-State’s reasonable hitting percentage of .292 with .346, which allowed the Mountaineers to escape Manhattan with a victory.

While the conference slate is over, postseason play is still to come for this K-State team. Details will be announced for the location and opponent for the Wildcats Sunday at 7:30 p.m. 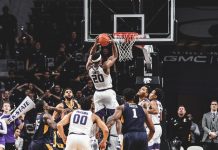