After sandwiching two of their best efforts of the season with disappointing losses to Long Beach State and Pittsburgh, K-State returns home for their first game in Bramlage Coliseum in two weeks.

Having traveled to Long Beach, California and to Hawaii for the EA Sports Maui Invitational last week, the Wildcats (3-3) are coming home to face Nebraska-Omaha tonight at 7 p.m.

The Wildcats are coming in sporting a defense that has struggled heavily to start the season. In its first six games, K-State had the lowest-ranked defense in the Big 12 with scoring defense, field-goal percentage, scoring margin, three-point percentage and rebounding.

“We got to have a sense of urgency (and) call this our week ‘tournament week,'” sophomore guard Marcus Foster said. “We have to make sure our resume is getting good for the tournament. This is a big week for us with Omaha and Tennessee, so we’re trying to go and get wins against these two teams.”

With hopes of ending their trip to Maui with a victory, the Wildcats were deflated early in a 70-47 smothering at the hands of Pittsburgh. The Wildcats fate was sealed by poor shooting and a solid defensive presence by the Panthers.

A constant double team of forward Thomas Gipson limited what K-State was able to do offensively. The senior scored 13 points and was the only Wildcat in double figures.

With Nebraska-Omaha, the Wildcats will be facing a team loaded with scorers and ranks 19th in the nation in scoring, averaging 83.2 points per game. Led by a pair of experienced guards averaging over 16 points apiece, the Mavericks are a small and fast-paced team.

“(The Mavericks have) quick little guards, a little bit like UMKC in that they got a bunch of people that can score,” K-State head coach Bruce Weber, said. “Probably more perimeter players that can score (than UMKC). We’ve got a test to see what we’re about here.”

Nebraska-Omaha knocked off Marquette on the road and has a narrow road loss to Nebraska. In the win in Milwaukee, Wisconsin against the Golden Eagles, they worked their way to 97 points with five double-digit scorers to secure their lone road win of the season. They are most recently coming off of a 78-54 win over Nevada at home.

The centers for the Wildcats will have to deal the Mavericks senior workhorse down low in senior forward Mike Rostampour, who averages a near double-double for his team with 9.8 points and 8.2 rebounds per game.

Junior forward Stephen Hurt and sophomore forward Brandon Bolden provide size for the Wildcats’ frontcourt, but both are learning the system of Weber and gaining in-game experience.

With sophomore Wesley Iwundu and senior Nino Williams both coming off of injuries and nursing themselves back into playing form, the Wildcats post could see improvements with the added minutes of both players. 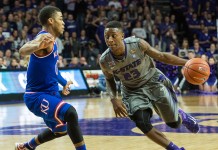 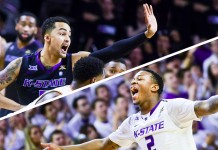 Column: We should not be quick to dehumanize Foster, Harris