November and December are the busiest months for the Flint Hills Breadbasket, the only food pantry in the Manhattan area. Located off the corner of Ninth Avenue and Yuma Street at 905 Yuma St., the Breadbasket stays busy all year long. However, employees and volunteers find the holiday season to be the most demanding.

Maribeth Kieffer, executive director of the Flint Hills Breadbasket, explained that there is the same amount of need year round; the holidays only differ because those in need are looking to have family meals, they just aren’t as fortunate to be able to provide those meals themselves.

The Manhattan community steps up during these busy months with a whole line of events, Kieffer said. The first of which was Cats for Cans that took place at the K-State football game against Oklahoma State on Nov. 1.

One upcoming community fundraising event will be the Lighted Christmas Parade on Friday, where canned food donations will be collected. Starting in downtown Manhattan at 5:30 p.m., the parade will go to Aggieville, where the Aggieville tree lighting will take place.

Kieffer said that levels of donations this year compared to previous years are in the same area, thanks to the continued dedication of so many people that know what the Breadbasket does for people in need.

“Every part of the community is a piece to the puzzle,” Kieffer said. “Just like a puzzle, it takes all of the pieces to complete it.”

Although the Breadbasket is frequently supported by the K-State community, there are numerous other organizations, volunteers and donors that help the Breadbasket serve the people that it does, according to Kieffer.

Currently, the Breadbasket is partnered with five churches in Manhattan that serve as pantries, while countless others collect donations from their parishioners. These churches include First United Methodist, Grace Baptist, First Lutheran, Seven Dolors and First Presbyterian. The Breadbasket sends food to these churches every Tuesday, where it is then served to those in the community.

According to Kieffer, two trucks travel to the east and west sides of Manhattan every morning to pick up donations from establishments such as Radina’s Coffeehouse, Chipotle, Olive Garden and local grocery stores.

However, there is a great need as always for both donations and volunteers. Especially since the Breadbasket has seen a huge increase in the number of people it serves since Kieffer took her place as executive director in 2011. That May, the organization served approximately 10,000 people, while today that number is more than 26,000. According to the Breadbasket’s website, more than 23 percent of Riley County lives at or below the poverty line.

During this time of year, churches and organizations hold food drives where the items collected get sent to the Breadbasket’s warehouse where it must be sorted. Breadbasket volunteers sort the incoming donations into large cardboard boxes labeled peanut butter, Ramen, beans and more.

The Breadbasket has some volunteers that help out regularly. Erin Sullivan, senior in dietetics, uses her studies in nutrition to cook fresh food for the Breadbasket and volunteers every other Tuesday.

“They really make a positive impact on the community,” Sullivan said. “They are kind to everyone, even making the effort to know people by name.”

For Kieffer, it’s important to have volunteers who really want to help.

“What we do is serious; people are hungry,” Kieffer said. “You can come and have fun volunteering, but when it comes down to it, hunger is serious.” 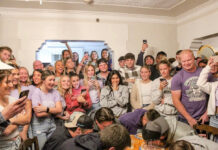 OPINION: Five holiday movies to watch when you should be studying