I am not just black.

I am not just female.

I am not just Christian – or just a journalist, or just an educator.

I am all of these.

Emboldened by courage, I stepped into the stormy tide of racial tension at K-State about 10 years ago. I’d packed nothing for the journey except my credentials, a hope and a litany of wants.

I wanted to make a difference for the Kansas State Collegian student newspaper, where minorities were underrepresented and where stories about them – if there were any – were awash in negative stereotype and innuendo.

I wanted to teach all of my students to not fear or shun conversations with people who are unlike them because communication not only harnesses ignorance, it also unleashes power.

I wanted to prove how more alike all people are than different, as the array of cultures, ethnicities and races simply mark the beauty of what it means to belong to humanity.

And like others, I wanted “life, liberty and the pursuit of happiness.” I do not believe one person takes a first breath without this desire because it is organic; it’s innate. It is germane to all people, and so it is also a yearning in the nucleus of every problem associated with injustice, inequity and inequality.

My early days at K-State were unusually difficult. I had left The New York Times and walked into an environment here that was ripe with conflict. My predecessor, Ron Johnson, had been removed as adviser of the Collegian after more than a decade in the post. For those who are unfamiliar with the story, this excerpt from a May 2004 article published by the Student Press Law Center sums it up:

“…Johnson and the Collegian have been embroiled in controversy since February, when the newspaper failed to cover the Big 12 Diversity Leadership Conference, a gathering of about 1,000 students to the campus in Manhattan. The Black Student Union, a student group at the public university, alleged that the newspaper did not adequately cover minority students’ issues and events. Members of the group led protests against the newspaper and Johnson, calling for his resignation because they believed he was not doing enough to promote diversity coverage by the newspaper. Students also objected to the newspaper’s publication of a headline that they considered racially insensitive and a comment from the call-in line, a system in which anonymous readers call in to voice opinions, that they considered racist.”

In 2005, I was hired as the first racial minority and woman to ever serve as the adviser for the Collegian since the newspaper’s founding in 1896. But it wasn’t just my race, gender or identity as a journalist and an educator that inspired me to want change. Rather, I truly value the narrative of every person’s life and our common need to overcome distinctions and divisions that have caused us all so much misunderstanding and hurt.

It wasn’t long before I discovered that overcoming would not come soon. However, there is no need to detail here the struggles I faced in dealing with K-State students, faculty, staff, administrators and alumni from various racial backgrounds — including my own.

Diversity is not something that we have created; it’s what was given to us.

Diversity is not a social construct. Race is.

Diversity will exist because it cannot un-exist.

Diversity is not static.

Our identities, roles and experiences are in flux. We will continue to evolve like the world around us, and so diversity will always have the potential to create gulfs between us.

Differences in rationale and reason, methodology and ideology, judgment and opinion will persist among people. However, our chasms and differences should not be seen as wholly unfruitful because they can spark soul searching, spur enlightening dialogue and ignite grassroots movement. In the midst of our diversity then, we should strive to learn how to co-exist in such a way that we progress together.

The CNN reporter also included a quote from Coretta Scott King who said she believed her husband and Malcolm X would have been more aligned with each other if they’d had that chance.

We may argue about whether the very different movements assembled around Martin and Malcolm both achieved qualified gains, but there is no dispute that both men were killed by an ignorance that was so identical that it superseded race.

We must accept that to varying degrees, all people are subject to the consequences of dealing with different people. That’s our great struggle: Dealing with people.

Collectively, my struggles at K-State have taught me that the most important goals of change should always be transformation and sustainability. If change is not simultaneously transformative and sustainable, it is good for nothing but a hard lesson in what not to do again.

A sustained transformation is what happened in the Collegian newsroom among students who shared my vision. It’s what promoted minorities to leadership roles in the newspaper, produced award-winning stories on issues of diversity, rallied all students – despite their differences – to work toward a common end, and created an environment that became (and has remained) more accepting and diverse than it had ever been in the history of K-State.

There is no space at the university that should systemically overlook the plights of the voiceless and the underrepresented whose identities and needs are not contemplated enough.

K-State needed its recent climate survey to help reveal the lapses in serving its population, but K-State also needed the crossing of Michael Brown and Darren Wilson because their unwitting fame (or infamy) has added another chapter to the epic story about race relations not just in America but also on our campus.

If we are now wiser, we would all make efforts to bridge chasms at K-State instead of assigning the task to build passage over them to someone other than ourselves.

Surveys have deadlines and demonstrations have places. Conversations, though, have all the time and room that we give to them.

If we don’t all begin to value the narratives of every person’s life, K-State will continue to make waves that flow toward the shoreline of change but die out before they can ever even shift its sands. 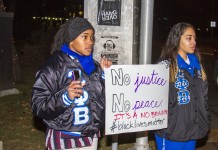 Cold weather fails to stop message of peace and equality

Letter to the editor: More than Ferguson