K-State’s pitch to Jake Waters during his sophomore season at Iowa Western Community College was a simple one: come to Manhattan and have a shot at winning the Big 12.

Two years later, that promise has become a reality.

No. 9 K-State (9-2, 7-1), led by their senior signal caller Waters, heads to Waco, Texas Saturday with an opportunity to capture at least a share of the Big 12 title.

“It would be the highest (accomplishment),” Waters said Tuesday at K-State’s weekly press conference. “It would be the best thing that I’ve done. When I came here that is what I wanted to do. I wanted to win a championship. Now we have the opportunity to do it. It’s cool; obviously, this is what you play for.”

The task in front of them is no small one. The Wildcats face No. 5 Baylor (10-1, 7-1), who is eyeing the conference crown as well, along with a potential College Football Playoff berth.

Senior quarterback Bryce Petty suffered a minor concussion in Baylor’s narrow 48-46 win over Texas Tech last weekend, but is expected to play Saturday. He has been phenomenal the last two years for Baylor, throwing for over 7,000 yards and 55 touchdowns in two-dozen games during that span.

Petty’s partner, sophomore running back Shock Linwood, has been a standout contributor all season long on the ground. The Texas native has amassed 1,135 yards and 15 touchdowns, leading the charge for one of the nation’s most well-balanced teams.

K-State will prepare for the Bears like they would any other team. They will watch film, practice under the lights and artificial noise makers at Bill Snyder Family Stadium and watch film some more. They will say this is their most important game they’ve played all season.

Still, the Wildcats are well aware of what’s at stake, especially the senior class. A win Saturday would not only secure the program’s third conference title, it would make them the first senior class at K-State to capture two conference titles during their tenure.

“That’s one of those things that us seniors want to be able to be remembered for here at Kansas State,” senior defensive end Ryan Mueller said. “We’re trying to leave a legacy.”

Even those who are not seniors understand what that means.

“This senior class is near and dear to me,” junior cornerback Morgan Burns said. “They are great leaders who have put a lot of time here in this program, guys who truly care about this program. I would love to see them go out with a bang, a win, knowing that they’ve done something that hasn’t happened in this program before. That would be super special.”

Heading into this season, a Big 12 championship was one of K-State’s top goals and the Wildcats hope to leave with a ring on their fingers. For the seniors, it’d be two in four years.

“This game has a lot of implications,” senior linebacker Jonathan Truman said. “Obviously, if we win we get at least a share of the Big 12. If we lose, we don’t. There’s a lot riding on this game, and we’re just excited to prepare for it and execute.” 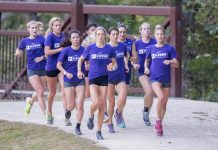