It wasn’t pretty, and it hasn’t often been pretty for K-State so far this season, but the Wildcats (5-4) found a way to overcome a poor offensive first half to beat Bradley, 50-47.

“Winning ugly is better than not winning,” Head Coach, Bruce Weber, said. “Proud of the guys, Nino was big time, he gave us everything he had.”

K-State was led by senior forward Nino Williams who had 14 points and 12 rebounds for his second double-double of his career.

Sophomore guard, Marcus Foster, also guided the Wildcats with 13 points, including 11 in the second half. That came after having only two points off of free throws in the opening half.

Foster aside, the first half offered very little for fans of offense. K-State had just three field goals and a 17:00 stretch without one.

“Obviously if Marcus doesn’t score it doesn’t help us,” Weber said. “They double-team Thomas (Gipson). We’re getting much out of our top guys offensively. Then you have turnovers where we were just too impatient. They fought things they switched things. We gotta be smarter.”

K-State hit 23.1 from the field in the first half, a percentage only improved by a desperation 3-pointer by sophomore guard, Nigel Johnson, to end the half.

K-State also had 11 turnovers in a first half in which the Wildcats only had 13 total shot attempts.

K-State came out of the second-half swing scoring the first six points of the half to take a five-point lead. They would be tied up once more, but would not trail for the rest of the game.

“First half we were a little dead,” Foster said. “I know my legs felt different than they usually do during games. Second half we just came together and talked about it in the locker room and corrected things we needed to correct to come out and play stronger. We started making shots, and I got going a little bit. That is all it came down to in the second half. We just picked up our energy level.”

The Wildcats led by as many as 11 in the second half, but due to another bout of cold shooting and missed free throws, the Braves were able to find their way back into the game and tied it up at 39-all with 7:57 left in the game.

Junior guard, Justin Edwards, reclaimed the lead for good after hitting a three, which was his only of the game.

K-State had several chances to put the game away early in the second half, but Bradley was left with a chance to tie it up down three with 1:05 left.

However, the Wildcats rebounded an air-balled 3-pointer with less than a second left to claim its victory.

K-State was able to clean up its play throughout the second half, improving its field-goal percentage to 42.9 percent and only committing six turnovers.

K-State is off until the weekend when they return to take on Savannah State in Bramlage on Sunday with the tip at 5 p.m. 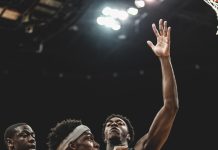