As with every major life change, there is a moment of reflection. Graduating from college is one of those changes where you reflect on your progress, and what you’ve learned the most in those four or five years. There comes a certain point in a student’s education where they realize that although college is difficult, it’s not constant — just a portal to success.

Studying, stressing, partying — those are the three primary functions of the traditional college student. But not for me.

According to finaid.org, non-traditional students aged 24-29, make up about 13.8 percent of undergraduate students pursuing a bachelor’s degree. As a 24-year-old mother of one, I am included in that percentage.

Being a mother in college means that unlike the bulk of your counterparts, education comes second.

Fortunately for me, I’ve experienced both sides of the coin. Traditional and non-traditional student life are both totally different ways to experience undergraduate life.

Two years ago, I was the student that went to class and sat in the back, just close enough to the door so that I could leave after lecture without holding a conversation with my professor. I was the student that emailed my professors when I had a problem because I was too intimidated to have a conversation face to face. As oxymoronic as it sounds, I was also the shy student with dreams of becoming a writer and fears of talking to people.

However, something happened to me after I became a mom — the drive I’d always had somewhere in me kicked into high gear. In typical new mommy-fashion, I was too overprotective to put my son in daycare for the first year. It was just me and my boyfriend here in Manhattan and our little tag-teaming “system” we had when it came to watching our son.

That meant when he wasn’t at work he stayed home with our son, and when I wasn’t in class or at work, I was on baby duty. This also means my boyfriend and I had a lot of “take your child to work days” — or in my case, interviews for the paper and meetings. Because of this system, I had to develop a relationship with my professors and faculty. That resulted in many heartfelt conversations and in turn, they’ve become sort of my support system.

I wasted a lot of time and energy fading into the walls instead of building lasting relationships with my peers. Yes, I went to parties and step-shows and plays. I went on roadtrips and experienced spring break in Florida and made lifelong friends during internships. I also experienced dating my high school sweetheart and the spontaneity of going to opening nights of highly anticipated films before we became the typical “homebodied” parents.

So don’t get me wrong, I’ve lived a full and eventful life before I became a mother, but I wasn’t focused on the things that mattered at the end of the day; like building these lasting relationships and taking initiative to get things done — by any means necessary.

Fastweb.com’s article, “The Best Ways to Get to Know Your Professor,” stresses the value of building those relationships with your professors stating, “… strong bonds with professors can lead to mentorship, letters of recommendation and sometimes job opportunities.”

I can admit that before becoming a mom, I wasn’t interested in developing relationships with my professors until one day I noticed; I was no longer the girl walking around campus with just an overstuffed backpack.

I was now the woman, marching around campus with baby in tow … plus the overstuffed backpack and my pen and notebook in hand looking for a story. I’m now the woman taking initiative in the newsroom and having the confidence to have those dreaded conversations like privilege and equality.

I was the student taking her child to advising meetings and getting him familiar with a college campus before he’s familiar with a video game controller. I’ve evolved into the woman who reads her son the chapters of her textbooks as a bedtime story. In the last two years, I grew from being the girl that faded into the walls, to the woman that stops in and has two-hour long conversations about life, with her professors.

I say all this to say, motherhood in college has not been easy and forced me to change for the best in so many ways. But the biggest lesson I’ve learned overall is that, motherhood without an education is not an option I’ve created for myself.

Ariel Crockett is a senior studying journalism in mass communications. 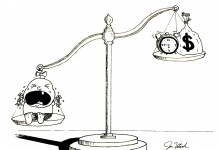 OPINION: Why being anti-kid does not make me the Antichrist

OPINION: Why being anti-kid does not make me the Antichrist