Similar to K-State, UCLA also had aspirations of a national championship this season. However, the Bruins were thought to be much closer at the start of the season due to the return of junior quarterback Brett Hundley.

Unfortunately for the Bruins, things didn’t go as planned. Like every other school, other than the four that made the playoffs, one thing or another led to the demise of of their championship hopes.

The season started out on a high note for the Bruins, who went through their non-conference schedule without a hitch, including a hard fought win in AT&T stadium against an upset-minded Longhorns squad. In the next game and their first Pac-12 game, the Bruins steamrolled No. 15 Arizona State, pouring 62 points on the Sun Devils.

In a that could have given UCLA momentum, then ranked No. 12 Oregon managed to down the Bruins easily and almost completely killed the hope of a national championship berth for the two-loss squad.

The last major hurdle for the Bruins came in the last regular week of the regular season. They needed a victory against Stanford to earn a Pac-12 championship berth and a shot to possibly sneak into consideration for the College Football Playoff. It was not meant to be for the Bruins as Cardinal quarterback Kevin Hogan threw three touchdown passes in the dismantling of head coach Jim Mora’s squad.

The success of the Bruins have been aided by the play of Hundley. Expectations are that he’ll leave school early for the NFL draft and he is projected to be one of the top quarterbacks in the draft class.

Hundley has proven to be one of the best quarterbacks to come through the UCLA. As the first five-star quarterback prospect to suit up in Bruin gold and blue, he has etched himself into the school’s record books through an illustrious three-year career.

The junior has set the all-time records in career total offense and passing touchdowns and has thrown for at least 3,000 yards in the last three seasons, topping out at 3,745 passing yards during his freshman season.

What makes Hundley special isn’t just his arm, but also his ability to get out of the pocket and make people miss when he scrambles. He is the second-leading rusher for the Bruins, rushing for 548 yards and a team-leading eight touchdowns on the ground.

The rushing stat puts him ahead of K-State’s leading rusher, Charles Jones. The sophomore has 521 yards and 13 touchdowns.

Hundley is also having the best season of his career when it comes to his decision making, only throwing five interceptions along with 21 touchdown passes.

He isn’t the only threat the the Bruins have in the backfield as they also possess the Pac-12’s leading rusher, sophomore speedster Paul Perkins. At 5-foot-11, Perkins has rushed for 1,378 yards, which is nearly as much as the Wildcats’ top three rushers combined.

While it sometimes stalls, the Bruins offense is one of the nation’s best in production, with 5,615 total yards and 467.9 yards per game.

The Bruins are the third best team in the Pac-12, allowing 401 total yards each game. The team is anchored by senior linebacker Eric Kendricks, who was just honored with the Butkus Award, the annual award given to the best linebacker in the nation. Kendricks has amassed 139 tackles, including a conference leading 96 solo-tackles. 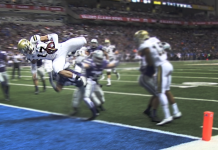 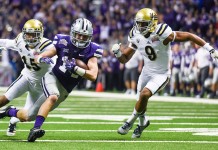 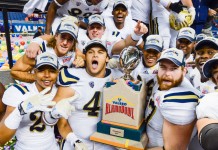