Though the two teams have had limited time to thoroughly watch film and examine each other, K-State’s defense has UCLA’s complete and undivided attention.

“Obviously they do a great job,” UCLA Offensive Coordinator Noel Mazzone said Wednesday. “I think they’re ranked 16th or 18th. I mean, they’re very high in a lot of categories. They don’t give up a lot of big plays, and they’re in a conference that play very similar offenses to what we do, you know, spread, tempo, get the ball out quick. They do an awesome job of when you watch them play, they’re very well coached, and they’re very good in their run fits. They’re very good in angles and fitting and controlling their tackling on the back end. They’re really good tacklers. I mean, just a really well-coached defense.”

The K-State defense enters the game ranked 24th in the country in stopping the run. Leading the way for the Wildcats in that statistic is senior defensive end Ryan Mueller and senior linebacker Jonathan Truman. Both players have particularly caught the eye of the opposing sideline.

“I like how Mueller and Truman plays, I (also) like how Randall Evans plays,” Mazzone said. “When you watch them play, those ‘cats can tackle. That, to me, is how they control all of that spread stuff, they’re just good at open field tackles. They are very well coached. When they got a gap, they’re in the gap. But Mueller, he’s just high energy — not overly big, but just a high-energy guy that gets to the football.”

It’s that strong, gap-sound run defense specifically that has caught the eye of Bruins sophomore running back Paul Perkins.

“They’re a really good defense. They tackle really well in between the tackles,” Perkins, who leads the Bruins in rushing with 1,381 yards this season with 115.1 yards per game, said. “Even when you do get past the first level they have a secondary that can tackle really well. The key to any run game is just being patient and let the offensive line do their job.”

However, where K-State has succeeded in stopping the standard run, they have struggled greatly when the quarterback tucks and runs, whether it be designed or a scramble.

Unfortunately for this K-State team, Hundley does have a knack for using his legs to gain yards when he’s not throwing downfield. Hundley averages 46.4 yards per game, which is especially of note because no K-State runner averages more than 44 yards per game.

Hundley is also a threat in the passing game, having thrown for 3,019 yards and 21 touchdowns to just five interceptions this season.

He has been especially effective leading his team in the red zone where the Bruins rank second in red zone offense, scoring on 44 out of 47 total attempts.

K-State does have had a solid red zone defense ranked 28th in the country. However, this will be one of the most challenging offenses K-State has had to face all season, end zone to end zone.

The Wildcats have struggled in the secondary at times this season, especially following lengthy quarterback scrambles, and UCLA is no stranger to the big play themselves. Junior wide receiver Jordan Payton has seen K-State’s vulnerabilities on tape.

“They have had some trouble stopping the deep passes, but overall they are a very experienced defense and they play extremely tough,” Payton said. “So for us, we get excited when we see big plays happen, but overall we know that is a huge task at hand we have to get going right from the get go. We’re excited, it’s kind of the city versus the country. It’s an interesting match-up.”

Interesting might be a understatement for what was dubbed the best non-“New Year’s Six” or College Football Playoff game by several experts across the country.

After all of the talk, all that is left is to see whether K-State’s defense can stifle UCLA’s high-powered offense, or if Brett Hundley and company will overwhelm the No. 11-ranked Wildcats. 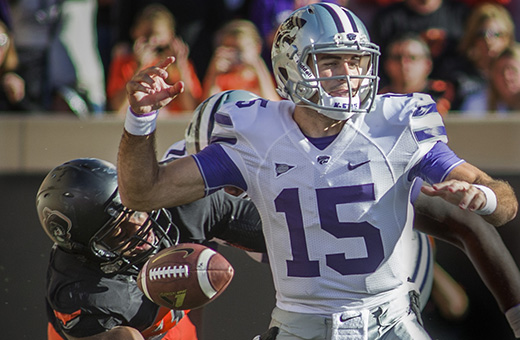 ‘Small things’ are biggest concern for K-State this season