Home Sports Football Where are K-State fans traveling from? 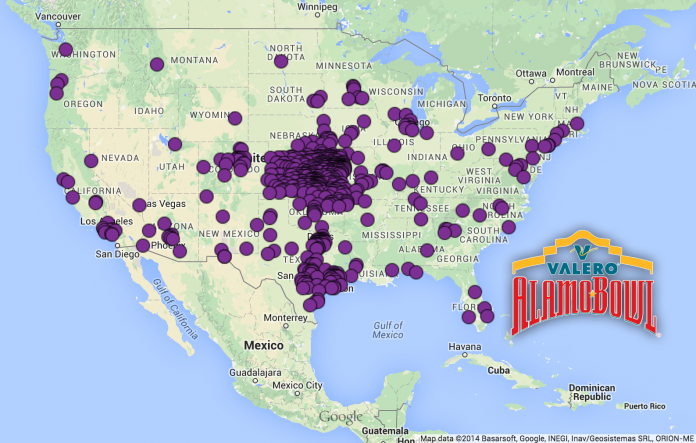 From Manhattan, Kansas to Shaktoolik, Alaska, K-State fans are making their way down to San Antonio, Texas for the 2015 Valero Alamo Bowl featuring the No. 11 Wildcats and No. 14 UCLA Bruins.

Athletics Director John Currie told the Kansas City Star Monday that the Wildcats have sold 10,000 of their 12,000-alloted tickets, but are expecting as many as 25,000 purple-clad fans in San Antonio for the bowl festivities.

The map above gives you a taste of where those fans are traveling from as of Dec. 23. As expected, a large contingent of fans will be traveling from the Little Apple and around the state of Kansas, as well as Texas, which is home to an extremely large pool of K-State alumni. However, fans from at least 41 other states from around the country will also be in attendance, as the Wildcats look to earn back-to-back bowl wins for the first time in over a decade.

If you’re making your way down south for the game, let us know by leaving a comment below.