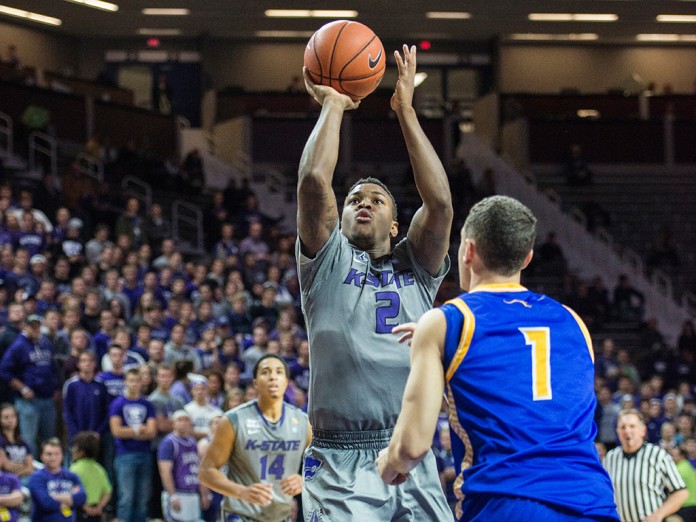 After three-consecutive losses, the K-State men’s basketball team finally put the pieces together to secure their first victory in nearly three weeks, beating TCU 58-53 at Bramlage Coliseum on Wednesday night.

With the victory, K-State erases the sour taste in their mouth after the three-game skid last week, including two home losses and a deflating road game against Oklahoma State Saturday to open up Big 12 action.

“It was a tough week last week, it’s a shame because we are a handful of possessions away from having a pretty good record,” K-State head coach Bruce Weber said after the game. “But it is what it is, and I kept telling them that you can’t dwell on the past, can’t worry about the future, all you can worry about is today, and that’s what we did.”

With lessons learned from those previous losses, the Wildcats showed improvement on the defensive side of the ball against the Horned Frogs. Averaging 74.6 points per game coming into the matchup, TCU entered one of the best teams in the country in scoring. But a solid defensive presence allowed K-State to overcome a stagnant offense en route to the victory.

While the victory helps the Wildcats’ confidence, the biggest story for the team was the way Foster played coming off of the bench. The sophomore star came into the game looking to show the coaches his value. With a team leading 23 points, he did just that and more.

“He (Foster) had two great practices, played hard, acted and played like we hoped he should,” Weber said. “I just told him ‘I can’t start you, you got to earn it on the court, it’s for yourself and for the team.’ Obviously he had a pretty good night, and we need him. He responded in a very positive fashion.”

For Foster, the experience was out of the ordinary. Since he arrived in the program, he’s been able to produce very well in the starting lineup.

“It definitely was tough coming off of the bench. It was something I haven’t been through in a while,” Foster said. “I think it humbled me more than anything.”

For Weber, he knows where the pressure on Foster comes from: himself.

“He has been very positive, I think everyone makes bigger deals about things than they should, but obviously when you’re the face of the program that happens,” Weber said. “I think he put a lot of pressure on himself from the start, maybe too much. Now, he just has to play, play hard and do the things he needs to.”

The first half seemed to revolve around Foster and his effort coming off of the bench for the Wildcats. Foster, who entered the game for the first time at the 14:07 mark in the opening half, quickly caught fire with two-quick daggers for his offense. He finished the first half with seven points on three of five shooting.

Also making a contribution for his team, junior forward Stephen Hurt began to chisel away at the Horned Frogs’ defense underneath the basket. However, Hurt made his biggest contribution at the free throw line, knocking down all four of his shots at the charity stripe. He and Foster’s shooting from the spot down the stretch allowed K-State to keep the momentum rolling to keep the Horned Frogs a safe distance away.

“I lost a little confidence in myself after Stillwater, and I just wanted to prove to myself that I’m still a good player, don’t get down on yourself, it happens to every basketball player,” Foster said. “To the doubters, I’m not going anywhere, I may have a little off week, but I’m still here ready to compete for this team and try to get a lot of wins.”

Senior forward Nino Williams almost secured a double-double, with eight points and nine rebounds. Sinking 41.3% of their shots, the Horned Frogs outshot the Wildcats (38.1%). Wildcats went 22 for 29 from the free throw line.

Monday Minutes: Time for K-State versus TCU football and other sports...