It was a rough evening in Stillwater, Oklahoma for head coach Jeff Mittie’s bunch, as the K-State women’s basketball team was blown out by Oklahoma State on Wednesday, 69-47.

Similar to the start in Sunday’s Sunflower Showdown, the Cowgirls (12-3, 2-2) jumped out to an early 12-point lead early. But, unlike the game against Kansas, the Oklahoma State offensive attack did not regress.

The defense that K-State (11-4, 1-3) has been able to hang their hat on throughout the season did not show up as well, as the Wildcats allowed the Cowgirls to hit 48 percent from the floor, including 50 percent at half and 53 percent from behind the arc.

K-State was also unable to turn defense into offense as well as they have been this season, with the team lacking in points off turnovers. In 12 of K-State’s first 15 games, the Wildcats have won the points off turnover margin. On Wednesday, the Cowgirls narrowly edged out K-State 14-13.

Comparatively, all five of Oklahoma State’s starters scored in double figures, led by senior forward Liz Donohoe who had 15 points.

The fast start for the Oklahoma State did give K-State a fairly sizable hole to dig their way out of, but was still fairly manageable until the Cowgirls put the game even further out of reach with a 12-0 run before halftime to go up by 21 points.

Mittie’s squad made attempts to make it interesting in the second half, including a seven-point run starting around the 10 minute mark. However, the deficit was just too much for K-State to overcome this time.

They are still winless in true road games this season.

K-State will have a chance to get back into the win column when they return home to the friendly confines of Bramlage Coliseum on Saturday where they welcome the Cyclones of Iowa State as part of a double-header with the men’s team. Tip-off is set for 7 p.m. 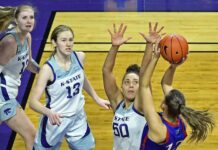