Weather has delayed the terminal expansion project at the Manhattan Regional Airport, according to the Little Apple Post. The construction, still in its first phase, is now expected to be completed in early February. Peter Van Kuren, airport director, said to the Little Apple Post that although the winter weather slowed things down, the crews have been able to catch up in recent days. Van Kuren said the airport will host an open house in late February for the public to view.

“So they get a really good idea of what the building will look like, some behind the scene areas where they typically wouldn’t be allowed to go during operations,” Van Kuren said.

Cigarette tax could more than double under Brownback plan

In his State of the State address, Gov. Sam Brownback proposed raising taxes on alcohol and tobacco products in order to make up for the budget shortfall. If his proposal gets passed, Kansas would have the 11th highest taxes on cigarettes in the country, according to the Topeka Capital-Journal. Under the Brownback proposal, tax on a pack of cigarettes would jump to $2.29 from the current tax of 79 cents.

Kansas revenue is expected to be $280 million less than expenditures this fiscal year. Next year, that number is projected to increase to $436 million.

“We believe this one-year blip will not have a significant effect on road conditions,” said Jerry Younger, assistant secretary for the Kansas transportation department to the Wichita Eagle.

Two state representatives plan to introduce a bill this week in the Kansas House that would equip Kansas law enforcement officers with body cameras, according to the Wichita Eagle. Rep. Gail Finney, D-Wichita and Rep. John Rubin, R-Shawnee are collaborating on the proposal.

“It protects not only the citizens,” Finney said to the Wichita Eagle. “It also protects law enforcement, you know, so it won’t be a ‘he said, she said.’ We’ll actually have footage documenting.”

Rubin referred to studies that show police misconduct charges decrease when body cameras are in use. He said one of the issues with the bill is finding the funding.

“As with so many things we do here, the details are what counts,” Rubin said to the Wichita Eagle. “And one of the big details is funding. What I don’t want to do to law enforcement is give them another state unfunded mandate that’s going to cost them a whole lot of money. So it’s a question of how we’re going to pay for it.” 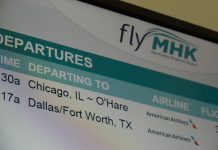