Well, Big 12 fans, after a disappointing football season where it seemed like there was no winning with the national media, a season where you felt no one really gave you the respect you felt like you deserved, congratulations! Your time has arrived.

The Big 12 has been anointed by the powers that be as the de facto “one conference to rule them all.” The heartland of America is supposedly where the best college basketball in America is being played.

The Big 12 has six of its 10 teams ranked in the top 25. Depending on what poll you favor, it has seven or eight teams that are ranked or at least receiving votes.

That is the most of any conference this season. It blows everyone out of the water minus the ACC, who sports five-ranked teams.

But before the Big 12 cracks open a bottle of delicious vindication, let’s be sure that the Big 12 dominance is more truth than hype. Remember, this is the same media that anointed the SEC West champions of the world before its top-five teams all lost in their respected bowl games.

Yes, the Big 12 has six teams ranked in both polls, but it only have one team ranked in the top 10: No. 9 Iowa State.

While the ACC only has five teams ranked, four of those teams are ranked in the top 10.

But, again, on the side of the Big 12 every team has at least 10 wins. The ACC has four schools with less than 10 and two more with exactly 10.

What does that really mean? Honestly, it’s fairly telling.

The Big 12 is a dynamo, no doubt about it. Top to bottom, it’s a solid league with really good teams down the stretch.

Some may point to Iowa State. They beat Kansas, which is a feat. Any year, no matter how mediocre the Jayhawks seem at times, a win against head coach Bill Self is not something to be taken lightly.

Iowa State also won in Morgantown against West Virginia, which is a good team. The Cyclones’ losses come to ranked Baylor, Maryland, which has turned into a very good team in a “meh” Big 10, and South Carolina, who is better then they have been.

Kansas hasn’t decided which Kansas it wants to be; the team who lost to Temple by 25 points or the one who just won back-to-back wins, both by double-digits.

Texas’ lofty aspirations have gone south (pun intended), at least temporarily. Oklahoma has looked like a team that can’t pull it together down the stretch and West Virginia just got pounded at home by a Texas team that, as previously stated, has by and far underachieved.

The rest of the not-TCU and Texas Tech-Big 12 has work to do to prove that they’re a real contender still. A contender for the conference, and a contender to make any real noise in the NCAA tournament.

This has been the Big 12’s issue for a long time. For one reason or another, it is very hard for this conference to put together a great team to make a great run in the tournament.

But that’s how you earn respect: you consistently prove that you are the best by having teams show up in the Final Four more than twice in a decade.

Only the Pac-12, who no one is accusing of doing anything near playing great basketball, has less championship game appearances in the past decade.

Thanks to the Butler, the Big 12 is tied with the Horizon league with a boastful two title appearances since the 2004-05 season.

It is only around the halfway point of the season. There is a lot of time for teams to grow, and time for teams to shrink. Maybe someone in the Big 12 will emerge as not only the top team in the conference, but a serious Final Four-type squad.

As of now, according the media, the Big 12 is the best.

But, when tourney time rolls around, will they be the best when it actually counts?

Timothy Everson is a sophomore in mass communications. 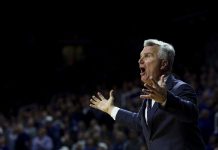 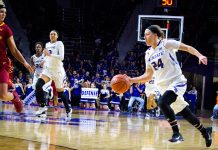 Wildcats look to upset No. 16 Sooners

K-State wins fourth-straight after comeback over No. 22 Baylor