After a first-place finish at the KSU-KU-WSU Triangular in Ahearn Fieldhouse on Jan. 17, the K-State track and field teams return to Ahearn Saturday to host the inaugural DeLoss Dodds Invitational.

K-State is 2-0 to begin the indoor-season. Tulsa and Oklahoma State will join the Wildcats in the weekend event. The meet will feature two ranked women’s teams, K-State and Oklahoma State, which rank 12th and 13th respectively in the most recent U.S. Track and Field and Cross Country Coaches Association women’s indoor team rankings.

Both the men’s and women’s teams are looking to continue their success after picking up 33 first-place finishes by their sprinters, distance runners and relay teams in their first two meets.

Freshman sprinter A’Keyla Mitchell has been one star for the K-State women. In all of her five-events this season, Mitchell has managed to earn gold medals. She has also broken school records in four of those five events.

Another freshman who has had a strong start to her career is junior-NAIA transfer Akela Jones. Jones has managed to pick up five gold-medals to begin her career with the Wildcats.

In her first-career with K-State, Jones set a school record in the 60-meter hurdles at the Winter Invitational. Jones has also managed to earn gold medals in the 4×400 relay, high jump and long jump events so far this season.

The DeLoss Dodds Invitational will serve as K-State’s last home meet until it closes out the indoor regular season with the Wildcat Open on Feb. 20. Field events will kick of the meet Saturday at 11 a.m. followed by the events on the track at 3:30 p.m. 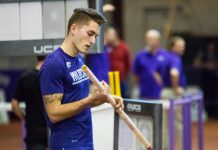 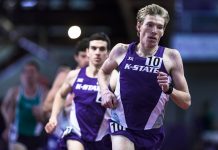 Wildcat track and field back home this weekend