Nino Williams has been a thorn in the side of Big 12 coaches this season.

The senior forward followed up a 22-point performance Tuesday at Iowa State with 20 points and 7 rebounds Saturday, all the while helping K-State get back into the win column with a 63-53 victory over Oklahoma State.

“The way he’s playing right now is as good as anybody,” Oklahoma State head coach Travis Ford said after the game. “You base it on the last three or four games, you just look at the numbers and they speak for itself. He’s leading his team to some wins — that’s always important.”

Williams finished 10 of 13 Saturday, nearly matching his career high in points from earlier in the week. K-State shot 75 percent from the field in the second half and 57 percent overall to improve to 12-8, 5-2 on the season.

Marcus Foster, who finished with 0 points against Oklahoma State — 13-6, 3-4 — three weeks ago, finished with 14 points and 5 assists Saturday. Justin Edwards also had 14 points for the Wildcats, including a 3-pointer with 1:07 left in the game to stretch K-State’s lead to 12 points.

K-State never trailed in the ballgame. The home team was unable to extend a lead greater than 14 points, but they did keep Oklahoma State at enough of a distance to squash any momentum the Cowboys picked up.

“The league is a grind,” K-State head coach Bruce Weber said. “You have to guard, you have to defend … Overall it was a good 40 minutes and a good team effort. We’re continuing to make progress.”

Williams missed his first shot with 16:37 to play in the second half, as Oklahoma State went on a 7-0 run to cut the lead down to 37-30. He left the game shortly thereafter limping. After being checked out by team personnel, Williams returned and sunk a deep 2-pointer to give K-State another double-digit lead.

Edwards provided a strong presence at the rim down the stretch for the Wildcats. His crossover and drive at the rim with 9:12 to play in the game gave K-State a 48-36 advantage.

Oklahoma State cut the lead down to nine points with under three minutes remaining, but an offensive rebound for K-State led to a dagger from Edwards in the corner. The Cowboys then watched the clock run out with the scoreboard in favor of the Wildcats.

Oklahoma State was led by Phil Forte III who had 22 points. Le’Bryan Nash contributed 13 points in the Cowboys loss.

K-State returns to action Tuesday against West Virginia. Tipoff is set for 6 p.m. from Bramlage Coliseum. 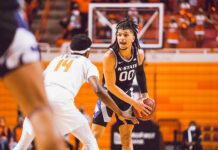 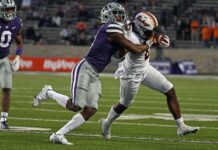