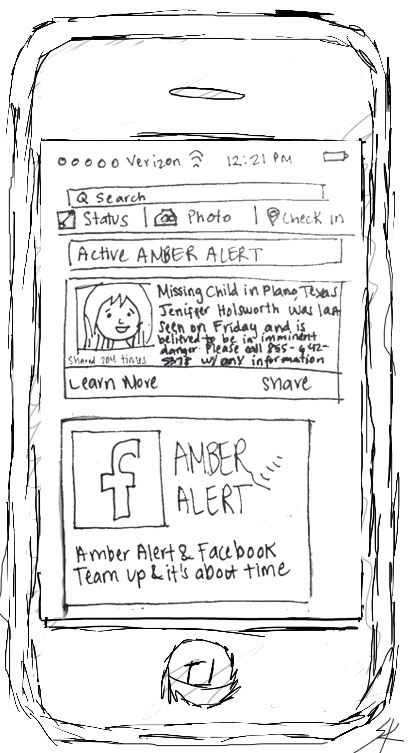 Facebook is being used for more than making new friends this year. As of Tuesday, Jan. 13, 185 million users in the U.S. have been receiving notifications of Amber Alerts according to USA Today.

It seems as though Facebook has put a lot of time and thought into the development of this program, one which will hopefully get the word out faster and possibly lower the number of missing or abducted children reported yearly. There are sharing options, direct links and updates to the National Center for Missing and Exploited Children and most importantly the ability to project the Amber Alert into areas where the abduction happened.

Emily Vacher, trust and safety manager for Facebook Security, explained to USA Today, “If you see an Amber Alert delivered, it means you are actually in a position to be able to help.”

This is harnessing our generation’s multitasking abilities while putting the notification of the Amber Alert right in front of us. There is no better way to reach those who do not utilize cable TV than attaching an alert to Facebook.

The Amber Alert system began in Dallas, Texas in 1996, according to amberalert.gov. The nationwide alert system was developed after the Protect Act was passed in 2003. Since then, alerts have been projected on electronic highway signs, radio and TV broadcasts. More than 700 children have been recovered since the Amber Alert system started.

Since 2013, people have been receiving text messages or notifications on their cell phones of Amber Alerts. These cell phone notifications – along with radio and electronic highway signs – have not been able to provide a photo of the missing child or other important detailed information. Facebook is able to include an abundance of photos as well as descriptions of those missing, thus providing better information leading to the whereabouts of the missing children.

With the increasing popularity of alternative TV viewing programs like Netflix, Amazon Prime and Hulu Plus, not as many audiences are watching cable or satellite TV. Many students living on-campus do not have cable TV because it comes at an additional fee. Students living off-campus with tight budgets often opt out of setting up cable in order to save money. These are just a few reasons as to why fewer and fewer people are being reached by Amber Alerts, until now.

While someone is viewing a TV show or movie on their computer, they could simultaneously have Facebook open in another tab, or be scrolling through the app on their phone. This is harnessing our generation’s multitasking abilities while putting the notification of the Amber Alert right in front of us. There is no better way to reach those who do not utilize cable TV than attaching an alert to Facebook.

The AMBER Alert Facebook page has almost 300,000 likes. That’s nearly 300,000 news feeds an Amber Alert is being posted on and potentially seen within seconds.

Facebook is one of the largest social media outlets. It connects and reaches millions of people everyday. Facebook is the third most popular app, and according to a CNN’s article. Amber Alerts on Facebook will reach thousands faster than a TV announcement or electronic roadway sign could.

Facebook users will not need to sign up to receive Amber Alerts. It directly targets users in the area where the alert originated and includes photos and other information. In addition to receiving the alert, users can share information with their Facebook friends and connect to the National Center for Missing & Exploited Children for updated information, according to USA Today.

The AMBER Alert Facebook page has almost 300,000 likes. That’s nearly 300,000 news feeds an Amber Alert is being posted on and potentially seen within seconds. That number of likes is a far reach from the 185 million Facebook users in the U.S. this campaign plans on targeting.

Although this Facebook Amber Alert campaign is a great addition to quickly locate missing children by providing information to a virtual army, will it reduce the number of missing or abducted children? Abductors may think twice before taking a child due to the amount of people who will be aware that the child is missing and know what he or she looks like. Abducting a child would become almost virtually impossible.

The new Facebook Amber Alert program is incredibly beneficial. It is taking something that may have passed with little notice and putting it at the forefront of one of the most powerful tools we have: social media. This is a direct witness to how the distribution of news is changing and being presented to the new generations.

Jena Ernsting is a freshman in agricultural communications and journalism.