Home Sports Men's Basketball You don’t have to like him, but Weber deserves K-State fans’ respect

Let’s start this off with saying that this column should not be necessary.

However, in a world where people let their sad, selfish vendettas get in the way of seeing the truth of the situation, it unfortunately is.

K-State head coach Bruce Weber shouldn’t have to defend himself. Thankfully, he has done well ignoring said vendettas. But, needless to say, the noise no less than three weeks ago was deafening, echoing from the mouths of an intentionally ignorant, vocal minority.

“Fire Bruce Weber! Burn it down!”

That was and, for most, still is, their shrill battle cry.

Sure, there was a large amount of uneasiness centered around what was admittedly a disaster of a nonconference season.

It’s reasonable, though incredibly short-sighted, that people could have endured the Tennessee, Georgia, and Texas Southern losses and panicked. It was a dark time.

They were there chomping at the bit, like sharks waiting for just a small bit of chum thrown their way so they could feast. It’s absolutely sickening.

“We lost a good coach. We got a coach that beat me and my team more often than not, and I just – I can’t figure that out.” – Tom Izzo

The truth is, no one can force anyone to like anyone. Nor should they. However, like or dislike, what does Bruce Weber have to do to earn just a sliver of some of these wayward fans’ respect?

“But he did it with Frank’s players!”

You’ll get this fun catch phrase and more when talking about Weber’s greatest achievement in his three season here so far. This is how deep the delusion is.

Instead of actually feeling pride for a real accomplishment for the program, Weber “haters” would rather tear it down brick by brick than possibly admit that they might have been too hasty with the torches and pitchforks.

Coaches inherit players that they didn’t recruit. That is a fact. But believe it or not, coaches still have to coach, and people who know what they’re talking about agree that Weber is quite the coach.

Big 12 coaches from Kansas’ Bill Self — Weber’s predecessor at Illinois — to Oklahoma coach and former K-State player, coach Lon Kruger and coaches in between have nothing but great things to say about the Wildcats’ head coach.

When Weber was fired from Illinois in 2012, it sent shockwaves through the Big 10 and the country. No coach was more outspoken on Weber’s dismissal than Michigan State head coach Tom Izzo.

“I feel worse for Bruce because we lost a good soldier,” Izzo said in a press conference in March of 2012. “And yeah, friendship is some of it, but it’s not all of it. We lost a good coach. We got a coach that beat me and my team more often than not, and I just – I can’t figure that out.”

Frankly, the man is revered around the country as a guy who does things the right way and wins. He won at Southern Illinois which led him to winning at Illinois, including a National Title game appearance.

The quote above was just one in a entire rant directed at Illinois after a Big 10 tournament game.

Where is Illinois now? Where is K-State now?

Illinois is 10th in a Big 10 conference that is top heavy but fairly mediocre. Illinois went to the NIT and lost in the second round last year. Meanwhile, K-State, second in a extremely competitive Big 12, lost in the first round of the NCAA Tournament to the eventual National Runner-Up in Kentucky.

There’s no arguing with insanity. The writing is on the wall. Stats can be quoted and points can be proved time and time again, but that only wastes time and precious breath.

There is no arguing with people who have made refrigerator magnets (they exist folks, no lie) dedicated to their misguided cause. If you don’t like Bruce Weber, fine. But there is no way you can look at what he’s done at his two-and-a-half years at K-State and not call him a success.

And isn’t success what this program is going for? 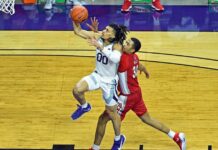 ‘We needed to be tougher’: Men’s basketball falls to UNLV after Rebels’ hot start