“He genuinely cares,” Flinchbaugh said. “That friendliness and caring is not put-on. Students can smell a phony from 10 miles away and so can he. I don’t know anyone who doesn’t like him. He has a way of telling you that you don’t know what you’re talking about and making you believe it.”

At the age of 7, Kays learned a great deal of responsibility when his parents purchased a cow-calf pair for him and his brother. Additionally, the Kays brothers helped do chores at home while their parents managed their business, Joe Smith Company.

His statewide involvement in 4-H in high school opened the door for numerous opportunities, including Kansas 4-H Youth Leadership Council. Kays met many friends through the organization who would attend K-State as well. A third-generation K-State student, Kays studies agribusiness with minors in animal science industry and leadership studies.

“My parents believed in education; they both got animal science degrees and pushed us to do our best,” Kays said.

Kays, senior in agribusiness, recalls his grandfather’s words, “You can go anywhere you want to for school as long as it’s K-State.”

“I had his mama in class, and I knew his grandpa,” Flinchbaugh said. “So he stood out in class right away. When I made the comment that I needed two students to be my assistants, he volunteered immediately.”

Flinchbaugh said he spends a lot of time with his assistants each year, as they help him before, during and after class with course materials, grading and sometimes “burning the midnight oil.”

“He approaches the role of student body president in the same positive and determined manner everyday. He has a great attitude. He is dedicated to working for the betterment of K-State students.” – Heather Reed

Anyone who spends any amount of time around Kays will tell you he is hard working and efficient.

“You never need to hit him with a 2-by-4,” Flinchbaugh said. “You just wave a twig at him, he straightens up right away.”

Heather Reed, adviser to the Student Governing Association’s executive branch, agrees that Kays is on top of his work ethic.

“He approaches the role of student body president in the same positive and determined manner everyday,” Reed said. “He has a great attitude. He is dedicated to working for the betterment of K-State students.”

This year, Kays has been busy doing what he can to make sure students have a positive experience at K-State.

He and Vice President Cody Kennedy, senior in secondary education and mathematics, do as much as they can to help keep student expenses at K-State as low as possible.

Kays co-chairs the Tuition Strategies Committee in SGA and meets with Reed weekly to discuss current issues, progress on their platform and other challenges he faces as student body president.

“I’ve learned more about how to work with people,” Kays said. “Students have a big influence and Cody and I try to leverage that influence without stepping on anyone’s toes.”

To Reed, Kays’ work on his election platform issues has been nothing but successful.

“The Lifeline 911 medical amnesty policy will be going before student senate soon,” Reed said. “He did a great job in working with students and campus partners to establish this policy, which has the support of all stakeholders.”

Another of his challenges is OrgSync, a program supported by Kays and the student senate.

“OrgSync has greatly increased communication with all our student organizations and the Office of Student Activities and Services,” Reed said.

Kansas Secretary of Agriculture Jackie McClaskey advises Blue Key Honor Society and got to know Kays well when he served as president of that group.

“He’s ingrained to work hard,” McClaskey said. “I think it goes back to his roots in agriculture. When there’s work to be done, he does it.”

He also interned at the Kansas Department of Agriculture for a summer working for McClaskey.

She attributes his excellent leadership abilities in part to his compassion, character, integrity and strong faith.

As hard as he works, he won’t take much credit.

“In terms of politics, my job is pretty easy,” Kays said. “It’s just promoting student life at K-Sate. Funding is the problem.”

Despite the challenges he faces in his role as student body president, Kays is able to appreciate the positives. Every day, he sees firsthand how much support comes from people who care.

“I’ve really come to realize this year that there are a lot of people who really care a lot about the students at K-State,” he said. “From staff to custodians to the president of the university, they all work really hard to make K-State so awesome.”

Those individuals are not the only people with passion, though.

In high school, Kays and his brother Garrett, junior in agricultural economics, started developing a pre-kindergarten agricultural literacy program at the largest day care center in Kansas to share their love of agriculture with the children. They brought animals to show the children and exposed them to basic agricultural knowledge.

“Some of those kids were blind, autistic, had never seen these animals before and were from all types of socio-economic backgrounds,” Reagan Kays said. “It was awesome. I think I learned just as much or more than they did.”

The sense of purpose the young men gained from this project would fuel their fires to continue on a larger scale.

“We had a great time educating these young kids about agriculture and learned the importance of taking agriculture to those who hadn’t been reached yet,” Garrett Kays said.

Now, the brothers advocate for agriculture on a higher level.

Reagan Kays said the agriculture senate at K-State sits as a group during meetings and even meets outside of that to discuss important issues in agriculture and provide information for students who want to know more.

“I just present the facts and fill in wherever they have questions,” Reagan Kays said. “Students from all over the world understand that they can ask me questions.”

He enjoys getting a global perspective himself and has traveled to seven countries and anticipates an eighth in the spring.

“I wrote in his letter for law school that he was a future Kansas governor or senator. If he wants to do it, he has the skills to. If his folks would let me, I’d take him home as a son.” -Barry Flinchbaugh

Some of these trips have been faculty-led study tours, but his most fond memory is the summer he studied abroad for six weeks at the Czech University of Life Sciences in the Czech Republic and traveled in Europe the remainder of time.

Reagan Kays encourages those thinking about going abroad to “go beyond the faculty led trip and get your feet wet. Get immersed in the culture. You have to fend for yourself a little bit. I gained a lot of independence doing that.”

While traveling is one of his favorite hobbies, there’s nothing quite like spending Saturdays at Bill Snyder Family Stadium and watching Wildcat football. He also enjoys being home with his family and taking in rural life.

Reagan Kays said he wants to continue raising cattle for the rest of his life and there’s no doubt he’s capable.

“We always see him as a student and a leader and very knowledgeable about what’s going on here on campus, but to me one of the coolest things about Reagan is that he has an incredible memory regarding the cattle that we’ve grown up producing,” Garrett Kays said. “He can remember the sires and lineage regarding the herd, even though we’re in Manhattan nine months of the year and gone doing other things in the summer.”

Reagan Kays understands the importance of family and cherishes the time he was able to spend getting to know his grandparents while they were alive.

“A lot of kids in my generation don’t know how to interact with older people,” he said. “They don’t realize how cool that interaction is.”

In his grandparents’ stead, Reagan Kays developed a grandfather-grandson-like relationship with Flinchbaugh.

“He kids me now that both of his grandfathers are gone now, so I’m his substitute grandpa,” Flinchbaugh said. “So I try to give him advice on all kinds of things.”

And the bond between the two men is strong indeed.

“I wrote in his letter for law school that he was a future Kansas governor or senator,” Flinchbaugh said. “If he wants to do it, he has the skills to. If his folks would let me, I’d take him home as a son.” 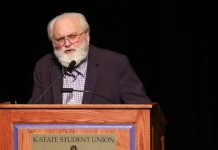 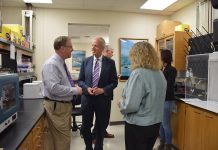