As we near the halfway point of the Big 12 season, the conference sits among the elite in the women’s game. While the Big 12 is anchored by the Baylor Bears once again, there are several others who are looking to knock Kim Mulkey’s squad off the top spot.

Here’s how they rank:

After an early loss to Kentucky, the Bears have been on a roll through their nonconference schedule and now into Big 12 action. After a 68-46 win over K-State this past Saturday, the victories should continue to roll in as this Baylor team is once again a true Final Four contender.

Sooners head coach Sherri Coale is a strong candidate for Big 12 Women’s Coach of the Year at this point in the season. After a 9-9 finish in the conference a year ago, Coale has her team in prime position to contend with Baylor for the Big 12 crown.

The Cyclones are currently one of the hottest teams in the Big 12. After starting 2-2 in the conference, the Cyclones rattled off three-straight wins before falling to Kansas Wednesday. Iowa State will have a chance to improve its resume with two games against Oklahoma and a third against Baylor on the horizon.

Despite a national ranking, Texas would like a fresh start in the conference. The Longhorns started 2-0 in before dropping four of their last five games, as well as losing their leading scorer, junior Nneka Enemkpali.

One of the early surprises along with Oklahoma has been TCU. The Horned Frogs are averaging 69.2 points per game and junior Zhana Medley is among the conference leaders in scoring. The early Big 12 slate has been generous to the Horned Frogs thus far, so expect the second-half to be more of a test.

Another team that started off 2-2 and has quickly nosedived, the Red Raiders are also in danger of missing the NCAA Tournament. One saving grace for Texas Tech has been the 3-point shooting of sophomore Minta Spears, who leads the conference at over 46 percent from behind the arc.

After five-straight losses in conference play, the Jayhawks are starting to get back on track as they enter the halfway point of the season. One of the main reasons behind the resurgence in Rock Chalk land is senior Chelsea Gardner, who’s among the league leaders in scoring at over 16 points a contest. Kansas still has to go on the road to Waco, Texas and Norman, Oklahoma, though, so fighting to get above .500 will be no easy task.

Oklahoma State’s 2-2 start in Big 12 play has gone south quickly. With four-straight losses to West Virginia, Oklahoma, TCU and, on Wednesday, K-State, an NCAA Tournament bid could be hanging in the balance much sooner than the Cowgirls expected.

If there’s one team who was dealt a brutal hand to start the 2014-15 Big 12 season, it was certainly West Virginia. The Mountaineers faced Oklahoma, Texas and Baylor in the span of six days, losing all three. To make matters worse, West Virginia then dropped games to Texas Tech — twice — and Kansas. The Mountaineers will look to turn their fortunes around Saturday against Oklahoma.

That sound you hear? That’s the K-State women’s team slamming the reset button on its Big 12 campaign to date. Sophomore guard Kindred Wesemann and senior Haley Texada have been solid fixtures for their team, but the Wildcats have simply been too inconsistent at times. However, a win Wednesday over Oklahoma State is a step in the right direction for this team.

Andrew Hammond is a sophomore in mass communications. 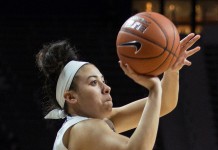 Off the Court with Bri Craig