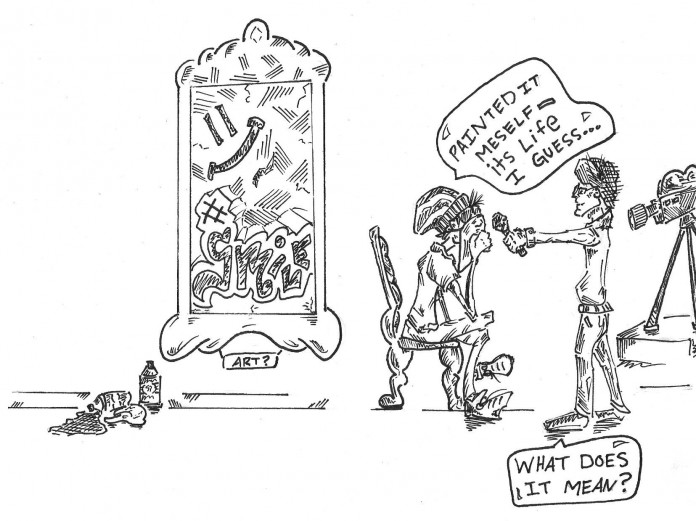 One of humanity’s first form of communication was by drawing on different surfaces, including walls. As humankind evolved, so did these wall drawings into street art.

Street art, better known as graffiti, has been around for as long as people have been creative. Banksy is a popular, anonymous street artist known for his beautiful yet thought provoking messages he conveys through street art. One of his famous phrases reads, “If graffiti changed anything, it would be illegal.”

There is something even more powerful about street art that other forms of artwork can not convey. It’s illegality and site-specificity makes the messages portrayed much more powerful. Images against buildings and walls scream for attention and challenge the ideas of the thousands that pass the art every day.

A true work of street art is thought out, clever, detailed or conveys a message. The racist slogans and inappropriately placed spray paint that stain inner cities is not what I would consider street art.

The majority of us, living in Manhattan and not in an urban area, are familiar with traditional street art and not much else. Many of us have seen the infamous Leasure Hall transformed into “PLeasure” Hall, but that’s about as hardcore as it gets around here. Street art takes on many forms, though. The vandalism on Leasure Hall’s sign is not street art; it’s graffiti.

Who decides whether or not instances of street art, not graffiti, are a crime?

There are different categories and sorts of crime that exist, and in order for street art to be considered one, it must be categorized as such. I will break crime into nine different types of crime as categorized by Zeynep Alpaslan, who studies whether or not street art is a crime. These types include organized, corporate, state, state-corporate, white-collar, blue-collar, political, public-order or juvenile delinquency.

Organized crime is a big group run by criminals, mostly for profit. A street artist receives no compensation for their work and usually remain anonymous. Corporate crimes are committed by a corporation or on behalf of one. Street artists, for the most part, work alone. Although the artist may fall into a category, for example, juvenile delinquency, the art itself does not fall into any such categories of crime. So is it a crime?

Who is the victim?

Leasure Hall is obviously the victim of vandalism when someone decides to make a clever joke of the unfortunately-named building. It is true that the surfaces “defaced” do not have a choice in the matter. I argue that some of surfaces improved in quality after being “vandalized.” Street art is a hassle to remove. According to a new graffiti removal program initiated in Lawrence, there are three ways to remove street art. These include solvents or chemicals designed for graffiti removal, pressure washing the surface and painting over the surface. All seem like daunting and seemingly pointless tasks for those business owners not wanting any street art.

I do not condone graffiti, a word I purposefully use, painted by criminals that taint buildings and other surfaces with their own signs and symbols, whether they be gang related or not. A true work of street art is thought out, clever, detailed or conveys a message. The racist slogans and inappropriately placed spray paint that stain inner cities is not what I would consider street art.

Who is the perpetrator?

Some might argue that street art is a crime because most artists wish to remain anonymous. It is true that famous artists, like Banksy, remain anonymous, but only because laws confine their inner artistic being that longs to be seen on objects and surfaces no canvas could suffice for.

Not all surfaces remain viable canvases for graffiti. Manhattan has had issues with vandalism graffiti in the past. There were 78 graffiti reports filed in 2009 compared to the 16 reports filed in 2008, according to the Riley County Police Department. Most of the graffiti was found along Poyntz Avenue in downtown Manhattan.

I use the term for street art for pieces of art that are beautiful. I do not argue that businesses vandalized with graffiti should appreciate the spray painted mess they have to clean up. I do argue that street artists, like Banksy, have every reason to come out of hiding and put a name to the art that brings cities to life.