After starting its indoor season with five-straight meets in the state of Kansas, K-State track and field traveled to Albuquerque, New Mexico over the weekend to take part in the New Mexico Team Invitational.

The event marked the first of three-straight road meets for K-State track and field.

In Albuquerque, the Wildcats managed to come away with 12-medal performances from the traveling roster, which did not include some of the more accomplished athletes on the season because of the team sending its multi-athletes to the Jayhawk Classic.

Both the men’s and women’s teams managed to sweep the high jump event at the meet. Freshman high jumper Nate Gipson finally broke the barrier by winning his first high jump event after finishing in second place in his first two tries this season.

The only other Wildcat to finish in first place was junior Sonia Gaskin, who managed to snag her eighth gold medal of the season. Gaskin has earned a gold medal in every meet she has competed in this season.

In the shot put event, junior thrower Dani Winters managed to set a personal record on her way to a second-place finish. The silver medal marks the fifth-straight meet where Winters has secured a spot at the podium.

One of the more impressive non-medaling performances for K-State at the invitational was freshman sprinter Terrell Smith, who, while finishing in eighth place in the 60-meter sprint, managed to tie his teammate, senior sprinter Carlos Rodriguez, for the fastest altitude-adjusted time in school history.

Sending a select few to Lawrence to take part in the Jayhawk Classic, the Wildcats managed to capture record performances, earning first- and second-place finishes in both the heptathlon (men) and pentathlon (women) events.

Junior star Akela Jones, who already owns multiple school records in her short tenure at K-State, nearly managed to break the school record for best pentathlon performance (4,402 points). It was was a career best, though, and a course record at Anschutz, as she finished with the gold medal.

With a personal best 4,945 points, sophomore Adan Deterding secured a second-place finish for his team in the heptathlon.

K-State track and field will return to action at the Sevigne Husker Invitational in Lincoln, Nebraska beginning on Friday. 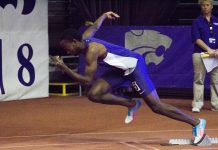 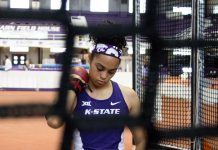