Although execution as a form of punishment has existed for generations, capital punishment in the U.S. reached a peak in the 1930s, with more criminals being put to death by the government than in any other decade since. Despite many Supreme Court rulings and high profile cases, capital punishment is still a highly-debated issue, one that sheds light on how fairness and justice is upheld in the U.S.

In my opinion, capital punishment is an inefficient way to punish criminals because it is an outdated, ineffective, biased and expensive practice that furthers a cycle of violence.

Capital punishment is an extremely outdated practice that has already been abolished in 18 states and the District of Columbia. Many U.S. states are coming to the realization that the death penalty is inhumane. Capital punishment is dormant in the military and in the federal system and, according to The New York Times article “The Slow Demise of Capital Punishment,” 30 states had no executions within the past five years as of 2013.

For a country that prides itself on being innovative, we are one of the last countries that still honors the death penalty. The U.S. is regressing with this controversial issue and should think differently. The death penalty, though still very much alive, has become less popular and is used most frequently in places such as Texas and Florida, where over half of 2013’s 80 sentences occurred, according to the Death Penalty Information Center.

Kirk Noble Bloodsworth spent nine years in prison and two years on death row for a crime he did not commit. Bloodsworth also said Carlos DeLuna, Ruben Cantu and Cameron Todd Willingham were others put to death before their cases were fully and thoroughly closed, according to his article in The New York Times, “Of Course the Death Penalty is Cruel and Unusual.” All three men have since had considerable doubt cast on their convictions.

Capital punishment is ineffective because it can be erroneous and biased as well.

“Someone will always end up on the short end of the stick,” Bloodsworth said in the article. “Most of the time, that person will be black or Latino and poor. If it can happen to me, it could happen to you.”

If we believe that the death penalty illustrates the ultimate definition of justice for victims, then we also have to accept that this form of “justice” is ineffective and biased as well.

These cases are also expensive due to long trials, excessive witnesses and timely jury selections, according to The New York Times article, “The Slow Demise of Capital Punishment.”

Housing prisoners on death row in Kansas costs twice as much per year ($49,380) as for prisoners in the general population ($24,690). Extra security is also needed for death row inmates, according to an article in Forbes magazine entitled, “Considering the Death Penalty: Your Tax Dollars at Work.”

In California, the annual cost of lifetime incarceration is a mere $11.5 million compared to the $137 million it costs to use the death penalty.

One may argue that this cost is justified because capital punishment is a warning. It illustrates the consequences of one’s horrifying actions and is used to scare people into not committing serious crimes. Millions of dollars is quite an investment to scare members of society. Money used to finance capital punishment could be spent on real crime deterrents such as courts, police officers, prison cells and public defenders. This could result in less crime than the fear capital punishment evokes.

With social issues, such as same-sex marriage, constantly changing, public attitudes towards the death penalty are changing as well. Regardless of their morals, U.S. citizens should view the death penalty from an economic standpoint as well.

A circle of violence

Capital punishment helps further a cycle of violence. Many who stand by the death penalty justify “an eye for an eye.” This idea only helps cycle a larger perspective that violence is justified.

Darryl Stallworth, deputy district attorney in Alameda County, California from 1992 to 2007, once fought to sentence a young man to death, but as he delved further into the case he realized that he was, “witnessing a cycle of violence.” The young boy had a rocky childhood in which his crime resembled traumatic violence he had gone through as a child. Stallworth realized that he couldn’t stand by the death penalty for this boy despite his crimes because it perpetuated a cycle of violence, according to The San Jose Mercury News article, “Death Penalty Perpetuates Vicious Cycle of Violence.”

Killing someone will not help bring a loved one back or make the victim and the perpetrator even. How are those that have implemented capital punishment any better than a murderer? The death penalty justifies killing someone and deems that the only way to properly punish someone is to take away their life. Capital punishment depletes the American justice systems definition of justice and takes their credibility away by perpetuating a cycle of violence which makes killing acceptable.

Abolishing the death penalty would rid the U.S. of an old-fashioned and backwards practice that is extremely costly, perpetuates a cycle of violence and is ineffective as a deterrent. If we move funds that the death penalty would use in more effective places we may have less crime than the “fear” capital punishment evokes. The U.S. and its citizens should look at more controversial issues from an introspective lens rather than from one seeking justice and revenge.

“An eye for an eye only makes the whole world blind.” Mahatma Gandhi.

Sonia Kumar is a sophomore in apparel textiles and marketing 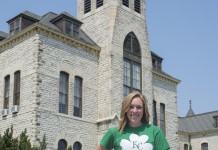 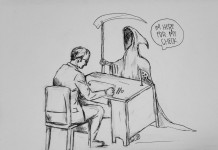 OPINION: Capital punishment: a not so simple answer