“You need to go on the show!” That’s how it started, with a few kids challenging their coach. Now, Lars Hanson, senior in marketing, is waiting to see if he will be featured as a contestant in the “American Ninja Warrior” TV show.

“I watched the show for the first time during the summer and I thought it was really cool,” Hanson said.

The competition has grown into a worldwide phenomenon since 1997 when Sasuke, the most difficult obstacle course on earth, was created in Tokyo, Japan. “American Ninja Warrior” gives everyday people the chance to conquer the unbeaten course and win $500,000. Hanson is determined to be the first American Ninja Warrior. After training for a few weeks, Hanson began the multi-step application process, making it through the first round.

“For the second application, it took about 20 hours total to complete all of the essay questions,” Hanson said. “They basically wanted to know about every aspect of my life.”

Along with the written portion, Hanson had to create a three-minute video.

“(The video) showcases my strength, as well as tells a story of why I wanted to go on the show,” Hanson said.

This is not the first time Hanson has dealt with athletic training; he played multiple sports, including cross-country and basketball. Hanson’s past experience in athletics has helped prepare him for the difficult obstacle courses American Ninja Warrior is famous for.

“Cross-country gave me muscular endurance and basketball has helped me with explosive power,” Hanson said.

That being said, an ironic injury in high school forced Hanson to quit sports for two years. It didn’t force him to quit forever, though.

“We’re are going to face obstacles that seem bigger than us in life and at times seem impossible. But the important thing is that we push through.” – Hanson

So what’s Hanson doing while waiting to see if he will be a contender on this popular television show? Training, and lots of it.

“I do strength training on my own,” Hanson said. “I primarily do body weights exercises which is exactly what you need for the course.”

This K-State student has a very personal reason for wanting to become the American Ninja Warrior. For Hanson, the answer is simple: Matthew 19:26 – “Jesus looked at them and said, ‘With man this is impossible, but with God all things are possible.'”

“Lars possesses a great faith in Christ, which I think makes him an even tougher competitor,” Jacob Gunn, Hanson’s former cross-country coach, said.

Hanson’s motivational quote represents more than just athletics, it is a representation of life.

“We’re are going to face obstacles that seem bigger than us in life and at times seem impossible,” Hanson said. “But the important thing is that we push through.”

As a coach for a youth speed and agility camp, Hanson’s determination has not gone unnoticed.

“Lars is very motivated by the strong relationships he has built with the kids he coaches,” Gunn said. “He wants to be an example of someone who works hard to try to accomplish his goals.”

Hanson has a large positive influence on the 250 kids he coaches. The kids clearly have an influence on him as well, encouraging him to sign up for the competition.

“He is such an amazing role model for everyone he teaches,” Maisie Thompson, camp participator, said in a phone interview.

Thompson has participated in Hanson’s speed and agility camp for two years. The eighth grader improved her mile time by over one minute during her first year at camp, then went undefeated in cross country for the first half of her season.

“Lars always pushes me to my limits and challenges me,” Thompson said.

Hundreds of camp kids, Goodnow Hall’s sixth floor, the K-State men’s basketball team and countless friends are all supporting Hanson in his endeavors. Add his supporters to Hanson’s faith, training and dedication, and an American Ninja Warrior could be among us. 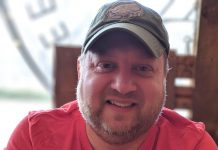 ‘She set the bar for us’: How Brookelynn Entz impacted the K-State soccer program