K-State baseball kicks off a new season today, as the team travels to Port Charlotte, Florida for the 2015 Snowbird Classic against Iowa, Pittsburgh, George Mason and St. Louis.

The Wildcats welcome 22 newcomers on the team after the departure of 19 letterwinners from the previous year’s squad that was picked to win the conference, but dropped to ninth by season’s end.

After the long offseason, K-State is anxious to move on to a new season after the disappointing finish a year ago.

“We are really excited,” senior outfielder Max Brown said. “We got a great team this season; just a really good team chemistry. We’ve worked all fall, and everyone is just itching to play other teams.”

The trip to Port Charlotte will be the longest in terms of distance this season. The Wildcats hold a 34-24 record in games played in the state of Florida, with the first coming in 1912 against the Chilloco Indian School in Gainesville, Florida.

K-State will face Iowa in its season opener at the tournament. The Wildcats will send sophomore right hander Nate Griep to the mound. Griep is coming off a 3-7 2014 season with a 4.66 ERA.

K-State is 9-7 all-time against the Hawkeyes, which includes a five-game win streak for the Wildcats.

On Saturday, K-State faces Pittsburgh for the first time in school history to kickoff a doubleheader. Junior right hander Levi MaVorhis will make his first start of the season coming off of a 6-7 record and 3.95 ERA as a sophomore starter in 2014.

In the second game of the doubleheader, K-State faces George Mason. Senior right hander and Washburn transfer Mark Biesma will hit the mound to take on the Patriots.

The Wildcats are 1-0 against George Mason after recording a win in 2013.

K-State will round out its slate of games at the Snowbird Classic on Sunday against Saint Louis. Madison College transfer Corey Fischer will make his first start as a Wildcat after a 11-4, 2.54 ERA performance a season ago in Wisconsin with his former team.

K-State is 2-0 against the Billikens with both games coming in the 1989 season. 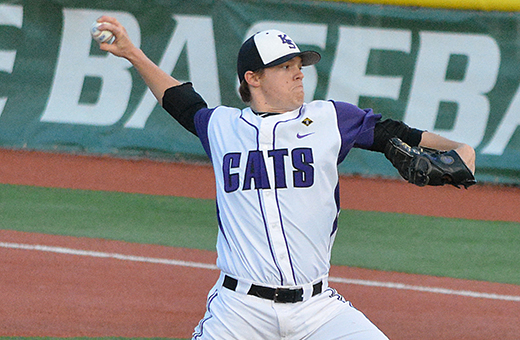