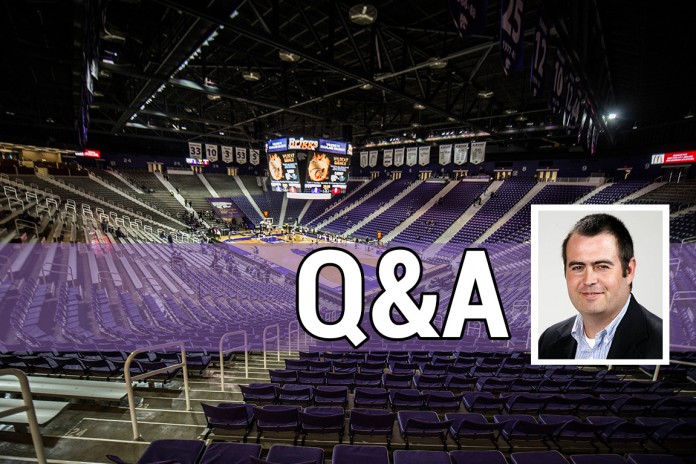 K-State and No. 17 Oklahoma meet Saturday for the second time this season. The Wildcats knocked off the Sooners in the first installment last month in overtime thanks in part to two big shots from sophomore guard Marcus Foster.

Collegian: Ryan Spangler has enjoyed success against K-State this season and in years past. What about his play allows him to dominate teams like the Wildcats, and what have you seen from him over the last few games?

Ryan Aber: I’ll start with the last part – he’s been fantastic over the last few games. Spangler has had probably his most consistent stretch of solid play on both ends of the floor during this recent five-game winning streak for the Sooners. He sets the tone for this team with his physical, tireless play and he’s been at his best of late including a 14-point, 12-rebound performance in Monday’s win over Iowa State.

As for why he’s matched up well against the Wildcats, I think it comes down to matchups. He can be a difficult guard since he’s got size and can pound inside with big guys but he also has some range and quickness that he can take advantage of away from the basket.

Collegian: Oklahoma had just two bench players play against K-State in January’s clash, combining for just five points. The Sooner bench has been quiet several times this season, yet the starting five has proven to come through time and time again. Is that a worry for head coach Lon Kruger? If K-State is able to hold two or three starters in check, should the Sooners be worried?

Aber: It is a bit of a worry but things are looking a bit brighter since then. Starting on the interior Oklahoma’s big freshman forward Khadeem Lattin has been much more consistent of late. Lattin isn’t going to add much in the way of scoring but he can bang around a bit on the glass and is an effective shot blocker.

On the perimeter, Frank Booker turned in his best game of the season Monday in the win over the Cyclones with 14 points. Booker went through an extended cold stretch from the outside wary in conference play but is rounding into form there. That being said, Oklahoma lives and dies with its starters. If the Wildcats can keep a couple of those Sooners’ starters in check, things get dicey, especially if Buddy Hield is one of the struggling starters. Generally, as Hield goes so goes Oklahoma’s offense.

Collegian: Buddy Hield was firing on all cylinders in the first meeting, finishing with 31 points on 11-20 shooting, including 20 points in the first half. However, in the final 20 minutes, K-State used the length of Wesley Iwundu to slow down Hield’s production. Do you see K-State sticking with the length vs. Hield matchup Saturday?

Aber: There’s the Hield mention and it’s a big one. I think K-State’s best bet would be to go with a matchup like that against Hield and force Oklahoma to work to get Hield open through significant ball movement or make other guys hit shots. As good as Isaiah Cousins and Jordan Woodard have been offensively on the perimeter, neither can do the kinds of things Buddy Hield does. Those guys are capable of helping the Sooners win games but neither is as consistent as Hield.

For that to be effective, though, K-State has to protect the ball on offense and keep the Sooners from breaking out into transition. That’s where Hield has done a lot of damage this season.

Collegian: Outside of Hield and Spangler, who has to be Oklahoma’s X-Factor Saturday?

Aber: Isaiah Cousins. Cousins has been Oklahoma’s best defender for much of the last two seasons, though Hield and Woodard have improved greatly this season. But he’s made a tremendous stride forward offensively this year becoming one of the top 3-point shooters in this league. He’s had a bit of a rough patch recently shooting the ball, coinciding with a wrist injury he suffered against Baylor last month. But he broke through a bit Monday. If he can hit a couple shots and take some pressure off of Buddy Hield, that could go a long way toward getting things going for Oklahoma.

Collegian: Which matchup should folks be paying attention to?

Aber: Nino Williams versus whoever he’s paired with on the other side, Ryan Spangler or TaShawn Thomas. Williams can be a load to handle in there and both Spangler and Thomas, though they’ve improved, have shown some vulnerabilities.

On the other end of the floor, it figures to be Oklahoma’s inside guys who can take advantage of some matchup problems, Spangler with his ability to draw things away from the rim and Thomas with his recent ball movement in helping find Oklahoma’s guards good looks as things move through the post, then his ability to finish off his teammates’ misses.