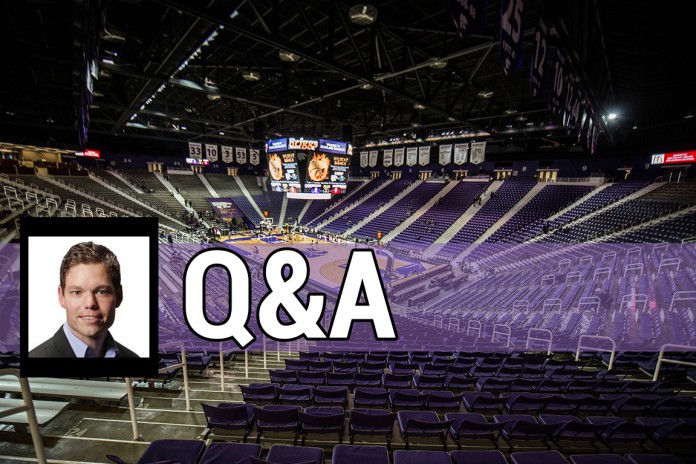 K-State and No. 8 Kansas take the court tonight against each other for the 281st time.

The Sunflower Showdown has provided some special scenes over the years: celebration, heartache, embarrassment and so on. There’s no telling what fans are in for tonight on Big Monday, but it’ll likely be filled with storylines and bickering between two passionate fan bases.

Collegian: While the Sunflower Showdown has been a one-sided affair at Allen Fieldhouse — to put it lightly — K-State has played Kansas much closer at Bramlage Coliseum. However, this year’s K-State team is struggling considerably more than in years past while the Jayhawks are putting together another Big 12 title run. Do you foresee another tight contest in the Little Apple?

Rustin Dodd: I think Kansas and Bill Self have come to understand that Bramlage Coliseum will be one of the tougher venues they play in all year. K-State has been struggling recently, but I imagine the opportunity to play Kansas at home will provide some motivation. It’s tough to win on the road in the Big 12. It’ll likely be close.

Collegian: In the first meeting on Jan. 31, Kansas jumped out to a commanding lead and didn’t look back. But in the second half, K-State actually outscored the Jayhawks. Was this simply a case of Kansas taking its foot off the gas pedal, K-State making some shots or the Wildcats matching up better?

Dodd: I just think Kansas has struggled to play well for 40 minutes all year. It’s not uncommon in college basketball. It’s also human nature to let up a little if you take a big lead in the opening minutes. It happens.

Collegian: Perry Ellis scored 19 points at Bramlage Coliseum last year and eight points in Manhattan his freshman year. Is he a matchup nightmare for the Wildcats or just a player who will score his point and grab his rebounds regardless?

Dodd: (Perry) Ellis is Kansas’ leading scorer, so they need him to score to play well. After a few struggles in January, he’s been pretty consistent for the last month. He’s a tough matchup for a lot of teams.

Collegian: K-State seemed content, as most teams have in years past, double teaming Kansas’ post players despite the Jayhawks consistently gashing it for easy layups. Has this worked at all for teams this year, and do you expect K-State to defend the same way this time around?

Dodd: Not many teams have doubled Kansas in the post this year, just because this is one of Kansas’ worst low-post scoring teams of the Bill Self era. Ellis scores a lot, but he does a lot from the high-post, and Jamari Traylor, Cliff Alexander and Landen Lucas have struggled to score with their back to the basket. I don’t know how K-State will defend Kansas, but I imagine they’ll start by trying to limit Ellis’ touches and containing Kansas point guard Frank Mason.

Collegian: What’s your favorite moment from the Sunflower Showdown over the years? Favorite matchup to watch?

Dodd: I covered the 2008 game at Bramlage Coliseum — the night K-State ended “The Streak” — as a student journalist. I’m not sure I’ve ever witnessed a game in a more emotionally-charged environment. It was wild. Kansas would go on to win the NCAA title that year, but even that Kansas team couldn’t deal with Bramlage that night. It was something else. Also, Michael Beasley was really good.

Collegian: What must Kansas do to earn a win? What about K-State?

Dodd: If Kansas makes shots and plays with solid energy on defense, they should probably win. If Marcus Foster gets hot and Bramlage starts going wild, it’ll probably be close.

Collegian: One matchup fans should keep their eyes on?