The K-State baseball team started their weekend with good pitching at the Big 12/Pac-12 Showdown in Mesa, Arizona. They bookended the four-game stretch with a strong offensive performance.

The Wildcats came out swinging against Washington State in the final game of the showdown Sunday, scoring at least one run in the first four innings to open up a 7-1 advantage over the Cougars. K-State ended up scoring a career-high 12 runs to take the contest 12-3.

From there, the blitzkrieg was on as the Wildcats enjoyed a huge second and sixth inning to put the game out of reach for the Cougars.

K-State junior catcher Tyler Moore smashed a three-run homer in the sixth inning to add insult to injury. It was the first K-State hit to leave the yard this season.

While K-State’s offense made pitching nearly irrelevant, the Wildcat arms threw strong as Fischer, who earned his first win of the season, gave up two runs before handing the pitching duties off to senior Mark Biesma and freshman Jackson Douglas, who pitched two scoreless innings.

“That’s kind of how you draw it up in college baseball,” K-State head coach Brad Hill said to K-State Sports. “Your starter goes six innings and gives up two runs. Your relievers throw the next three and give up one, and no errors for the first time (this weekend) — that really helps out.”

K-State tied the ballgame 5-5 in the bottom of the ninth on an RBI by Yagi after trading runs with the Huskies all game.

However, Washington was able to steal the 6-5 win with a passed ball, error and an intentional walk to load the bases for a two-out, walk-off RBI.

“Our kids are showing good fight, and we’ll come back,” Hill said. “We’re showing some toughness, but now we have to do the little things to win games.”

It seemed like the rout was on after a six-run second inning put K-State in a 6-0 hole, but the Wildcats found a way to rally twice to tie the ballgame up 9-9 heading into the bottom of the ninth inning.

However, with two outs, one strike in the the bottom of the ninth, Oregon State sophomore Billy King smashed a single past the K-State infield to put an end to K-State’s valiant comeback attempt.

“Great effort by our kids,” Hill said. “We got down big like we did and worked ourselves back into it, took a lead and came back to tie it in the ninth.”

“You hate the fact that (Griep’s) out there for 100-and-whatever pitches, but he was still throwing 92 in the ninth inning,” Hill said. “He’s a great conditioned athlete and a fierce competitor.”

K-State walked off in the bottom of the ninth on a bases loaded RBI single by junior outfielder Danny Krause.

K-State (4-4) opens up their home slate against Eastern Illinois on Friday. First pitch is scheduled for 3 p.m. from Tointon Family Stadium. 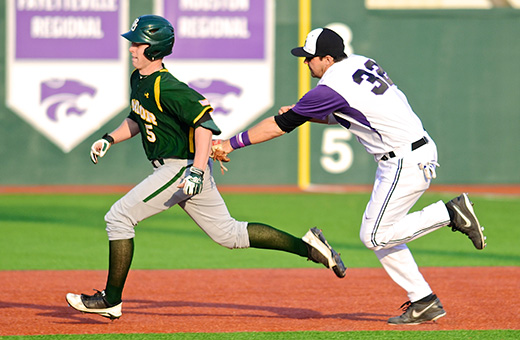