Thomas Gipson was visibly upset Saturday after K-State was trounced by Baylor in Waco, Texas. Though typically a quiet, low-volume-type player, Gipson criticized K-State with no restraint.

That criticism included himself.

He admitted that the team is currently lacking mental toughness, adding “that’s not how K-State basketball does it.” Losing, he said, was frustrating enough, but being embarrassed by 27 points was something new and ugly.

Basically, Gipson summed up what many already have found out: this K-State men’s basketball team is currently fragile. Apathetic. Lackadaisical. Going through the motions. Complacent. Lost. Struggling. Searching for answers.

Whatever it is, Kansas, the team 75 miles down the road, is perfectly OK with it.

Two programs heading in opposite directions. However, K-State head coach Bruce Weber said he remembers the scene a year ago in Manhattan when roughly 5,000 students swarmed the Bramlage court under a scoreboard that read: K-State 85, Kansas 82. He recalls his team perched atop the scorers table celebrating an upset, Sunflower Showdown victory.

That’s what he and his K-State team are clinging to heading into the Big Monday matchup.

“The way we play at home, I don’t think there is any doubt we can play at a high level,” Weber said to reporters Saturday. “Now, can we play good enough to beat them? We are going to have to guard. We can’t do what we did at the start of the first Kansas game and what we did tonight, allowing layups. Hopefully we can get our mindset right and use the crowd and get after them a little bit.”

Kansas is the clear favorite and for good reason. The Jayhawks lead the series 188-92. Kansas head coach Bill Self is 20-4 against K-State. And in Manhattan all-time, the Jayhawks carry a .619 winning percentage.

Records aside, but statistically speaking, Kansas is still the better team. The Jayhawks are averaging nearly 72 points per game while holding opponents to 64 points a contest. Five Kansas players average more than seven points a game, led by junior forward Perry Ellis, a strong candidate for Big 12 Player of the Year, at 13.3 points per game.

This isn’t the strongest side Self has fielded in his 12 seasons at Kansas. The Jayhawks lack a true post presence and a go-to scorer. But this is a Self-coached Kansas team that, well, plays like a team. Kansas is ranked 27th in the country rebounding the ball, grabbing nearly 40 boards a game. The Jayhawks distribute the ball well and finish when it matters most.

On the other side, K-State has been up and down as a team this season. Sophomore guard Marcus Foster and senior forward Nino Williams continue to lead the team with 13.4 and 11.4 points per game, respectively, but turnovers and careless defense have set the Wildcats up for failure too many times this season.

The Wildcats can hang their hat on the “Octagon of Doom,” though. K-State has lost just four times at home this season, and the margin of victory between K-State and Kansas in Bramlage in the last three seasons has been 4.3 points a game. Last season it was three points, and K-State was the team that came out on top.

Monday will be a test for K-State. A test of mental toughness, willpower, adversity and all the words and phrases that led off this preview. If the K-State team that knocked off No. 17 Oklahoma shows up to play, fans may be in for a treat and a possible court storming. If the team that lost by double-figures to TCU and Baylor steps on the court, it may not be pretty.

K-State and No. 8 Kansas tipoff from Bramlage Coliseum tonight at 8 p.m. 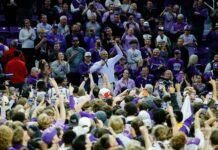 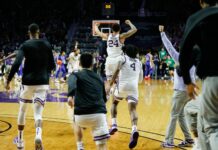 K-State takes down the Jayhawks in statement win

OPINION: In Bruce Weber I trust