In the event of an active shooter on the K-State campus, students and faculty are encouraged by policy to safely inform building occupants, and then lock doors, block windows, close blinds, seek cover and stay in place until police clear the building.

The common response policy to active shooters has been the lockdown procedure, in which hiding behind a locked door and waiting for help is the main strategy. A new policy is on the rise for K-State, though, one that focuses on increasing the safety of students and staff further: the ALICE program.

ALICE is an acronym for “alert, lockdown, inform, counter and evacuate.” The program is designed to give people caught in active shooter situations different survival strategies.

Capt. Donald Stubbings, K-State Police Department, said he supports the new response policy. K-State is set to adopt the program by the end of the year.

“ALICE will be a part of initial learning on campus,” Stubbings said.

According to Stubbings, blending community training and officer response is key to effectively handling active shooter situations. K-State’s campus police officers have been through the latest training in active violence, including the ALICE program.

The program suggests people do not need police or military training in order to survive a violent situation. ALICE encourages people to go beyond securing a room, stating the importance of making a plan in case an aggressor enters the area. The new program also gives strategies in worst-case scenarios, like confrontation of an aggressor.

From 2000-13, the FBI conducted a study that included 160 active shooter incidents that occurred during those 13 years. The purpose of the study is to provide data to law enforcement and communities that will help prepare them for active shooter situations.

Universities pose a challenge for active shooter response programs. College campuses span a large geographic area and have a constantly changing environment. Steve Broccolo, emergency management coordinator for K-State, said he feels the ALICE program is a good fit because it gives people more choices then the old policy.

“There aren’t too many rooms on campus we can actually lockdown,” Broccolo said.

Many rooms on campus are accessible to anyone. Broccolo explained how ALICE goes beyond the idea of simply barricading doors. The program offers strategies, such as using belts or zip ties to increase the strength of a locked door.

Training programs are in place where students, professors, and staff can learn about the ALICE program, and a video will soon be available for access by students and professors about ALICE.

Jim Parker, director of Lafene Health Center, recently had his staff undergo the ALICE training program. The program breaks down the meaning of ALICE, past active shooting incidents, statistics from lockdown situations versus active response situations and steps that people can consider to increase chances for survival.

“It prompts you to think about what would happen if there was an active shooter, and how you prepare for how you think in that scenario,” Parker said.

Lafene originally used a coded public-address announcement system to respond to any threat in the building. After ALICE training, the policy has changed. In the case of an active shooter, announcements made on the P.A. system will be clear and defined.

Stubbings agrees that communication is key in surviving an active shooter emergency.

“The best a community can do is actively follow emergency procedures and alerts,” Stubbings said.

As for Parker, he said he is pleased with the options ALICE provides people, and believes every department could benefit from ALICE training.

“You’re not waiting around for help from the outside,” Parker said. “You’re kind of being self-reliant. If you have an active response to an active shooter, you have a survivability rate that is going to be way higher.” 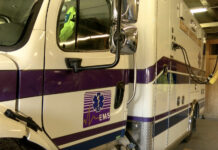 OPINION: Guns should be restricted on college campuses

OPINION: Guns should be restricted on college campuses