It’s been a topsy-turvy week for the Big 12 conference as the regular season draws to a close. K-State and No. 12 Iowa State were in the thick of the madness earlier this week, which involved a court storming and a late-game collapse at home.

Now, the two meet Saturday in precarious positions with much to play for.

The Wildcats (14-15, 7-9) enter on a high after upsetting No. 8 Kansas at home Monday for the second-straight season, looking to prove to fans that not all is lost in an underwhelming campaign thus far.

The Cyclones, meanwhile, also prospered from K-State’s big Monday win, with it allowing them to run the table with a favorable slate of games to finish off the regular season.

Chances come and go, however. Iowa State fell at home for the first time this season against a pesky Baylor side Wednesday. Now the Cyclones find themselves in a must-win situation heading into Manhattan Saturday as they attempt to spoil the Jayhawks’ 11th-straight Big 12 title bid.

“You can’t let one turn into two,” Iowa State head coach Fred Hoiberg said to reporters after Wednesday’s Baylor loss. “You have to bounce back with a great practice tomorrow with great energy and great effort. We now have two days to prepare for a afternoon game on the road. Obviously K-State is a team that has a little rest and a little mojo going after beating Kansas.”

K-State is battling back at their own self-inflicted demons, desperately trying to get a foothold on a long-shot possible at-large bid.

“Now we have five top 25 wins,” K-State head coach Bruce Weber said after the Kansas game. “We were one of six that had four so I don’t know how many teams have five. It’s a little frustrating and a little disappointing but it’s done and over with.”

Even with a compelling resume to ponder, the Wildcats are trying to keep their sights focused on just winning the next game and digging their way out of their hole one shovel-full at a time.

“All we can worry about is Iowa State and enjoy tonight,” Weber said. “Take a day off tomorrow —they need it — we’ve had four games in 10 days. Wednesday is going to be weights and shooting and talking and then hopefully a good practice on Thursday. Lots of preparation for a very good Iowa State team. It’ll be Senior Day, so hopefully a good crowd again.”

The first matchup at Hilton Coliseum in Ames, Iowa was a classic as K-State found themselves with a 69-67 lead with a little over four minutes to go.

However, that’s when the wheels fell off for K-State offensively. The Wildcats went scoreless for four minutes before junior guard Justin Edwards scored an uncontested layup with two second left to play. By then, though, it was too little too late.

“Good effort,” Weber said after the game in Ames. “It’s disappointing because we had a chance to beat one of the top-10 teams in the country, but we showed we’re as good as anyone.”

Iowa State junior forward Jameel McKay dominated the Wildcats down low with 15 points, seven rebounds and three blocks. On the season, McKay is averaging 10.9 points and 6.7 rebounds per game to go along with 2.5 blocks a contest. He isn’t a dominating force at 6 feet 9 inches, but his ability to run the floor gave K-State trouble in the first go around.

That said, a bright spot for K-State was their ability to slow the tempo, especially on Iowa State’s home court where they have eclipsed the 80-point mark nine times this season.

“I thought we did good in transition,” Weber said. “They had zero points in transition and they have one of the best transitions games in the country. That was huge.”

In honor of Senior Day Saturday, senior guard Shawn Meyer and forwards Nino Williams and Thomas Gipson will be honored before the game.

Williams been the most consistent player for the Wildcats, finishing in double-figures 16 times this season. He also earned the 2014 Ed Nealy Most Improved Player award in 2014 and is likely to earn an All-Big 12 selection in the coming weeks.

Gipson is a four-year starter for K-State and, currently, sits at 1,193 career points, which is good for 14th all-time in school history.

Meyer has been a role player off the bench for the Wildcats as walk-on. He has earned the Big 12 Commissioner’s Honor Roll twice in his time with program.

Tipoff between K-State and Iowa State is scheduled for 3 p.m. from Bramlage Coliseum. 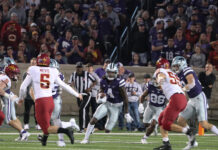