It’s rare to have what would be considered a homecoming game this late in the season.

Such is the case for K-State head coach Jeff Mittie, who faces his former team, TCU, in Fort Worth, Texas Saturday for the first time since leaving for K-State.

In the season’s first meeting in Bramlage Coliseum, the Wildcats (16-11, 6-10) dispatched the Horned Frogs (16-11, 8-8) 93-79 in an offensive explosion that saw K-State nearly eclipse the century mark for the first time in nine seasons.

“The basketball part was the easy part,” Mittie said following the TCU victory earlier this month. “The preparation, we didn’t talk about it. I think they knew who we were playing.”

After the TCU win, K-State dropped three-straight games — two at home — which may dampen their NCAA Tournament at-large bid hopes. However, with a win over in-state rival Kansas on Wednesday, the Wildcats remain in line for a winning season in Mittie’s first season as head coach.

One of the stars Wednesday against the Jayhawks was Texas native Haley Texada. The senior scored a season-high 20 points in her final regular season game against Kansas. When playing against TCU earlier this month, Texada put up 16 points to go along with four assists.

Although the Wildcats have struggled at times with consistency, one player has made history by consistently being a threat near the basket. Sophomore Breanna Lewis passed Marlies Gipson with her 87th and 88th blocks of the season Wednesday to become the all-time regular season blocks leader at K-State. Lewis has now tallied 36 games with at least two blocks in her two short seasons in the Little Apple.

Much is expected of Lewis, who dominated the Horned Frogs in the first matchup with a career-high 28 points and 12 rebounds. Lately, though, Lewis has struggled to replicate that form. Although she broke the blocks record against the Jayhawks, she shot just 2-10 from the field to finish with four points and eight rebounds.

K-State and TCU are scheduled to tipoff at 2 p.m. from Fort Worth, Texas. 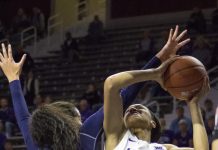 K-State women earn a spot in the NCAA Tournament; will play...