Home Culture Feature Is the millennial generation becoming the ‘Me Generation?’

“Self-centered” and “self-absorbed” seem to be adjectives often used to describe “kids these days.” This millennial generation, however, is not the first one to question the rules and defy societal norms.

Following World War II, there was a temporary but noticeable increase in the birth rate from 1946-64, according to the History Channel website. People born during this period are members of the baby boomer generation. They rejected tradition and initiated times of cultural change in the U.S.

Members of this generation had new ways of thinking and they had a changed outlook on life, including a heavy focus on self-fulfillment, according to the Smithsonian website.

“To me, the baby boomers realized their individuality and ‘breaking free’ from the norm, and they took advantage of it,” Caley Greving, junior in management, said. “They started to get out from under their parents’ scrutiny and do their own thing.”

According to Vern Wirka, KSDB-FM faculty adviser and instructor in journalism and mass communications, the generation before the baby boomers are credited with winning a world war, and sacrifice was what they grew up with.

“Many of them, of course, had grown up through a depression and subsequently a world war,” Wirka said. “I really think that they raised their children in an atmosphere that said ‘we did all of this for you,’ and their general attitude was to ‘make the world this better place for you, and we did that. Now here it is.’”

“Maybe in some cases they didn’t earn or work as hard as they could, and they felt some form of entitlement,” Wirka said. “So, while I think the generation that raised the baby boomers was trying to do something good, it didn’t necessarily work out entirely that way.”

As a result, the baby boomers were the first generation to be called the “Me Generation.” Now, however, some people claim that the millennial generation (people born between the 1980s and the early 2000s) have taken over the “Me Generation” title due to a large amount of self-centeredness.

Greving said she believes the change can be partially attributed to technology and a self-driven attitude. The baby boomers may have started the trend toward self-centeredness, but the millennials have capitalized it.

“I believe that they are the ‘Me Generation’ because everyone is so focused on everything that they can get, and just the culture in general seems a lot more selfish” – Alec Khoury

“Technological advances have put millennials in front of baby boomers, in my opinion,” Greving said. “Also, more people realize that they can be successful on their own and will do anything to get where they’re going. I think this is why they are more of the ‘Me Generation’ than baby boomers.”

Alec Khoury, junior in economics, was born in 1994 and as such is a member of the millennial generation. He said he also believes the millennials are the “Me Generation.”

“I believe that they are the ‘Me Generation’ because everyone is so focused on everything that they can get, and just the culture in general seems a lot more selfish,” Khoury said. “Everyone in our generation thinks they’re going to grow up and be famous and rich and cool.”

The shift from self-sacrifice to self-centeredness started with the baby boomers, but has continually grown throughout the decades. It can be argued that the sense of individuality and belief in oneself are positive traits gained through the change in culture initiated by the baby boomers. That being said, it is the sense of entitlement and selfishness that follows the “Me Generation.” The baby boomers are the originals, but millennials are portraying beliefs and attitudes that contest the title.

Whether you believe the baby boomers or the millennials deserve the “Me Generation” title, Wirka cautions against getting caught up in your own perceptions.

“Especially in teaching and, well, other professions, something that you don’t want to do is allow yourself to get trapped into just your historical perspective, just your context,” Wirka said. “Because it’s a different world.”

OPINION: Social Security: Will it be there when we retire? 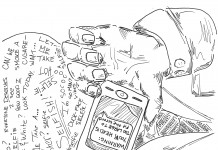 OPINION: Why selfies are an outlet for the conceited

OPINION: Social Security: Will it be there when we retire?