Student Governing Association senators started off their last meeting before spring break with Student Body President Reagan Kays, senior in agribusiness, addressing the senate about fee proposals that are currently being considered by the Tuition and Fees Strategies Committee.

The proposals by the College of Engineering and the College of Business are asking for fees over a period of five years. The current policy for the Tuition and Fees Strategies Committee, however, only allows fee recommendations to be made for one year at a time and proposals must be re-submitted each year.

Kays asked that concerned students contact him or Speaker Abby Works, senior in chemistry, to answer their questions.

K-State International Tuba and Euphonium Association received $1,000 to bring Tim Buzbee, a world-renowned tubist, to K-State for a concert and course on April 22. Senators also approved $1,000 for the Minorities in Agriculture, Natural Resources and Related Sciences to send 10 members to the 30th annual career fair and training conference in Houston.

Statute changes were also considered to prevent student organizations from requiring members to be a part of a class and request funds from SGA. They also considered minor changes to improve the wording of the current statutes and simply and clarify the meaning of the statutes.

“A lot of this is just meant to clear things up and make it easier for future senators to know what things mean,” Mason Grittman, senior in mechanical engineering, said.

An amendment was introduced to dictate when all campaign materials will be allowed on-campus, such as buttons, T-shirts and posters. While the amendment, if approved, would not prevent campaign materials off-campus, it was intended to even the playing field for all candidates.

“I know a lot of people who thought about running but then didn’t run, because they felt like they were already so behind people who know how to campaign and had started already,” Codie Webster, senior in political science, said.

Treasurer Jordan Marquess, senior in biology, submitted a request for $1,985 to be moved from the Student Groups Reserve Account to be used for allocations for fine arts student organizations.

Funding was considered for In-A-Chord to send 15 members to the National A Capella Convention in Memphis, Tennessee, for the amount of $1,000. McCain Auditorium Student Ambassadors was also considered for an allocation of $250 to send 15 members to Kansas City, Missouri, for an Art Adventures trip. An allocation totaling $1,060 was considered to the College of Agriculture Student Council to bring Trent Loos, a columnist for the High Plains Journal and advocate for agriculture, to campus to give a speech about advocating for agriculture. 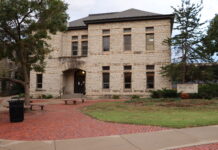 Senators focus on funding for organizations