Home Head to Head OPINION: Colleges should reevaluate what it means to be ‘greek’ 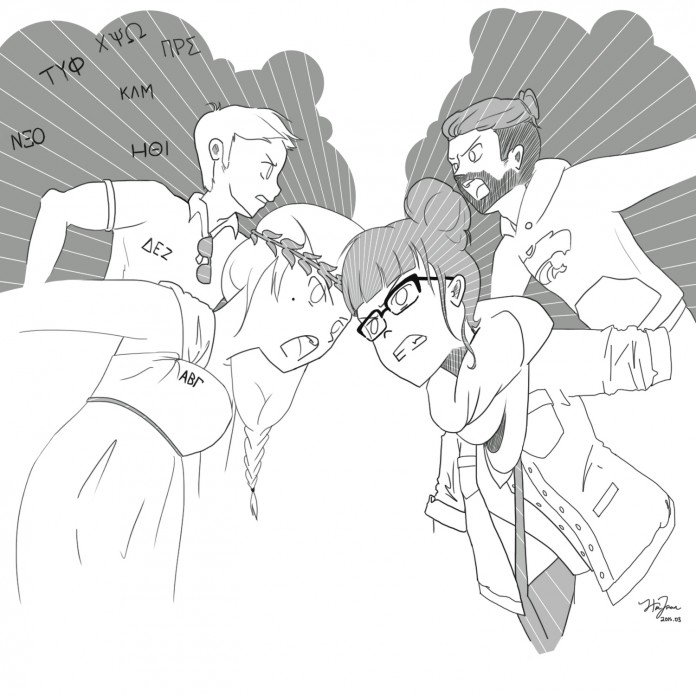 Greek life has become nothing more than a cruel way to categorize and separate people based on looks, wealth, gender and race.

As a previous member of the greek community, I can tell you firsthand that bad intentions and power trips separate the houses and those in them. While I have to agree that making friends in this exclusive community is easier than having to work to get to know others, the negatives surrounding the entirety of what “greek life” apparently is outweigh any positives the community could muster in their defense.

I preface this all by stating this: my roommates are all greek. Most of my friends are greek. They are not racist and they are not mean. They are amazingly wonderful people who supported me after being kicked out of my own sorority.

A couple years ago, I was seen in a Youtube video that revolved around K-State parties. Although I never had a drink in my hand, I was still underage. Many of my sisters made their debut in the video as well, actually holding liquor and doing things that would be considered inappropriate. For some reason, only a few of us were brought up on the standards board.

I argued that I accepted whatever punishment they saw fair, I just asked that the punishment was even across the board to every sister in the video. All of the other women were eventually called up to standards as well, and were handed punishments such as cleaning up sisterhoods and other minuscule things.

When I was awaiting a punishment from members on the judicial board (half of whom hated me for being an extrovert and one who was currently dating an ex of mine), I knew I was a goner. Little did I know I would be thrown out of the house and given nowhere to stay. One other girl was given the same punishment.

All I have left of being in that sorority are a couple of crappy T-shirts and unfriendly, familiar faces on campus that remind me of the amazing “sisterhood” I thought I once had.

As bad as being kicked out of my own sorority may have seemed, I consider the whole ordeal one of the best learning experiences I could have gained in college. I became stronger because of it and was able to weed out who my true friends really were. I can’t say the same for members of Sigma Alpha Epsilon in Oklahoma.

A nine-second Youtube video that has recently surfaced has set the greek community at the University of Oklahoma into a frenzy. The video reportedly shows students, most of them members of the Sigma Alpha Epsilon fraternity, chanting a disgusting, racist song.

I applaud Oklahoma’s President David Boren for severing ties with the fraternity, whose greek letters have already been removed from its former house. Protests have since ensued, made up of hundreds of students (including Boren) on the Norman, Oklahoma campus this past Monday. Boren even took to social media to disgrace those partaking in the racist chant.

“To those who have misused their free speech in such a reprehensible way, I have a message for you: you are disgraceful,” Boren said in a tweet. “You have violated all that we stand for. You should not have the privilege of calling yourself ‘Sooners.'”

I was shocked by the video. After speaking with friends about the ordeal, racism is apparently more common in the greek community than I could imagine.

Matthew Hughey, an associate professor of sociology at the University of Connecticut, studies racial dynamics in American greek life. According to the March 10 CNN article titled, “Are frats ‘a form of American apartheid’?” Hughey is not surprised by this video either. The members chanting the horrid words are not simply “bad apples,” as Hughey puts it, but rather, part of a “bad orchard.”

“Largely, these organizations reflect a super segregated and unequal system that is made up of college and alumni members all over the world,” Hughey said to CNN.

This is one of many controversies and scandals that has arisen out of the greek community. According to the Dec. 15, 2014 Daily Pennsylvanian article titled, “Phi Delta Theta holiday photo sparks controversy,” the University of Pennsylvania’s Phi Delta Theta’s posted a Christmas card last year that raised eyebrows and tension. The picture depicts all caucasian males and a dark-skinned blow up doll in the corner posing for a Christmas card.

The list of “incidents” occurring within the greek community goes on and on, including issues and under-pursued accusations of sexual assault, parties that lead to excessive binge drinking, safety concerns and issues of segregation and racism.

Not everything about going greek leads to more racism and a feeling of exclusiveness no nerd could possibly infiltrate. According to the June 4, 2014 USA Today article titled, “Study: Going greek may lead to the ‘good life,'” those in the greek community felt 10 percent more prepared for life after college than their non-greek peers. Sorority and fraternity members were also 5 percent more likely to be engaged in their workplace (enjoying what they do and being good at it) in greater numbers than other graduates. They were also 6 percent more likely to be thriving in their community than non-greeks.

While the number difference may be small, making connections and meeting the “right people” in the greek community is one major reason I am disappointed to no longer be in one. As May approaches and graduation breathes heavily upon my neck, I find myself wishing I had a mass mailing list of girls to call upon for post-graduation connections.

I can’t ask that greek organizations be completely removed from K-State. That is not a viable conclusion or solution to these controversies. I do think the values and reasoning behind greek life should be evaluated to determine if any campuses’ sororities and fraternities live up to the standards they were apparently created on in the first place.

My experiences have led me to disagree with the greek community, but I now put the ball in your court to prove me wrong. Those of you in fraternities and sororities, question what it is you actually stand for. Do people feel accepted? Is there segregation within the community? What are your values? Are they something worth supporting? Some of the answers might leave us questioning greek life altogether.