K-State baseball wrapped up a five-game jaunt in Texas Sunday with a 6-1 loss against the No. 14-ranked Texas Longhorns to complete the series sweep.

The Wildcats did not have the bats to compete with a strong Texas pitching staff, registering just two hits in the game to produce one run.

K-State’s two hits came in the third inning with junior catcher Tyler Moore starting the inning off with a single. Moore was able to advance on a sacrifice bunt by senior outfielder Max Brown, and was brought home on a two-out RBI by junior outfielder Clayton Dalrymple that evened the score early at one apiece.

“We were not able to press (Texas) offensively,” K-State head coach Brad Hill to K-State Sports said. “We couldn’t get any life in our dugout and bring us any energy. We had about two opportunities, maybe, in the game (to score runs). With a pitching staff (like Texas), that’s all you may get and our guys are going to have to learn to step up and take advantage of those opportunities. We are going to have to get over the hump, and we are going to need to figure out how to manufacture some offense when the hits aren’t there.”

Junior pitcher Corey Fischer was handed the loss after giving up four runs on five hits in just 4 1/3 innings.

With Friday’s game postponed due to rain, K-State played a doubleheader against the Longhorns on Saturday.

Game 1: The Wildcats fell in the first game 5-3 due to clutch hitting by the Longhorns.

Griep however was able to find his rhythm and kept Texas scoreless across the next four innings.

K-State got back on the board in the sixth and the seventh innings with a RBI single from Moore to score junior outfielder Danny Krause. An error on a failed throw-out later allowed junior short stop Tyler Wolfe to score.

Holding onto a 3-2 lead, K-State walked into a nightmare in the eighth inning, as the Longhorns found three runs to take a final 5-3 lead.

Game 2: K-State was not able to find as much offense in the nightcap of the doubleheader as the Wildcats fell 3-1.

Sophomore pitcher Colton Kalmus took to the mound for the Wildcats and gave up runs in both the first and third inning to hand Texas a 2-0 lead.

However, the Wildcats only put runners in scoring position one more time in the game, as the Longhorns took game two before sweeping the series on Sunday.

K-State returns home briefly for a midweek game against Nebraska-Omaha at Tointon Family Stadium. First pitch is set for Wednesday at 6:30 p.m. 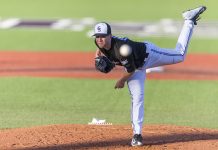 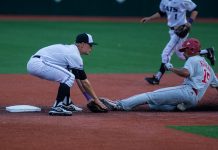