K-State women’s rowing sent three boats out west over the weekend for the San Diego Crew Classic at Mission Bay. By the end of the competition, all three qualified for the competition’s Grand Finals for the first time in school history.

“I’m really pleased that the three boats were able to make the finals, which was sort of what the aim was — come out here and try get into the final, and they all three did that,” K-State head coach Patrick Sweeney said to K-State Sports.

The success started with each of the teams finishing second in their preliminary heats to reach Sunday’s Grand Finals. Leading the charge was the 1st Varsity 8 squad, which secured a program-best second-place finish with the best time for the Wildcats.

Sweeney credits their success to adjustments that were made throughout the weekend.

“We learned a few things and they adjusted to it,” Sweeney said. “They did a really good job making that adjustment and having a better race pace today.”

The Wildcats’ next event is the Southern Intercollegiate Rowing Association Championship Regatta in Oak Ridge, Tennessee on April 18. 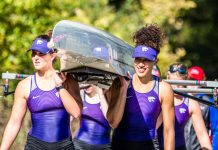 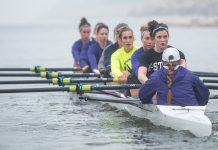 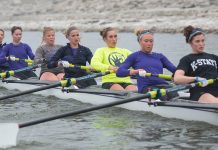