According to a press release from the Manhattan Fire Department, firefighters were dispatched to Willard Hall to the K-State campus shortly before 3:30 p.m. on Sunday after a fire alarm sounded. Firefighting crews found smoke coming from room 318, and the fire was quickly extinguished.

One individual was treated by Riley County Medical Service for a small burn to the hand and released on scene.

“We congratulate Roosevelt University on hiring Ali Malekzadeh as president,” K-State President Kirk Schulz said in a K-State Today news release. “Dean Malekzadeh was a driving force in creating a vision for our College of Business Administration that has inspired our students, alumni and donors. We appreciate the dynamic progress made during his time at K-State and wish him success in the future.”

According to WIBW News, college students attending public four-year schools in Kansas may see further cuts to their financial aid due to legislative action on a program that governs school grants.

The clause in question, added to Gov. Sam Brownback’s Comprehensive Grant Program, states that private independent colleges should not receive less than 75 percent, or approximately $13 million, worth of need-based grant funded by the state. The remaining 25 percent left for public universities such as K-State, the University of Kansas and Pittsburgh State University.

According to KSNT, the Kansas Senate is debating whether or not to expand liquor licenses in order to allow supermarkets and grocery stores to sell alcohol.

Supporters of the bill, such as large businesses like Hy-Vee, Quik Trip and Dillons, argue that wider alcohol sales will help help create more convenience for consumers and help improve the free market. Opposers of the bill say the measure would take profits away from the approximately 750 liquor stores in Kansas that are individually owned.

In the article, Tuck Duncan, Kansas Wine & Spirits Wholesale Association lobbyist, said the move would be a “logistical nightmare” for companies that produce and distribute strong and light beers.

The Senate Federal and State Affairs Committee is holding a hearing Tuesday to discuss the matter. 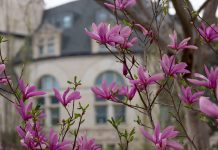 A new Hale in sight: The road to recovery progresses with library’s fall first floor debut