The event was emceed by the UPC music co-chairs Zach Bailey, senior in entrepreneurship; Lauren Sokolosky, junior in family studies; and Arthur White, junior in marketing.

The judges based their scores off of stage presence, vocal quality, personality and how the contestants connected with the audience.

Kocher acted as the comic relief upon his deliberation, light-heartedly joking during his evaluation of each contestant. Furney used her musical background to give insight on the performance quality.

“I really enjoyed the show and I liked listening to the talent the K-State students have,” Megan Mellring, freshman in pre-professional elementary education, said.

The show opened with a special performance by Furney, where she sang an original piece called “Sweet Nothing” from her debut album. Furney also covered of Sia’s “Chandelier.”

“Jessica’s performance was good and the high notes surprised me during ‘Chandelier,’” Charday Crawford, sophomore in pre-psychology, said.

Peter Esau, graduate student in kinesiology, took first place and the title of K-State Idol. Esau performed his original piece titled “50 Shades (of Cray).” His song was satirical and parodied “Let it Go” from the film “Frozen.”

“I feel 50 shades of red; everyone was so good and talented and I am happy to have been able to perform,” Esau said during his acceptance speech.

Deanna Richard, freshman in applied music, won second place with her version of “Listen” by Beyoncé. Angela Livingston, junior in management, and Liz Hix, junior in speech education, placed third with a duet version of the Lennox and Maisy cover of Charli XCX’s song “Boom Clap.”

“Coming from a home town where everyone knew me to performing here was eye-opening,” Samantha Carpenter, freshman in music education, said. 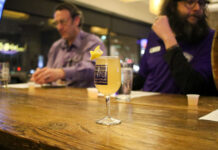