Brackets are busted, teams have been sent packing and all that remains is four teams playing for one dream.

Why will Kentucky win the National Champion?

Steinlage: Because, they are by far the best team in the tournament — and it’s really not all that close. Yes, Notre Dame played the Wildcats down to the wire, but let’s put Kentucky’s season into perspective. This team was expected to go undefeated this season at the end of last year’s campaign. That lofty expectation has been a weight on this group’s shoulders; however, now they are on the big stage. I think we’ll see a much looser team that has too much talent for teams to compete with. The only way Kentucky loses is if they have a bad game. Even playing just slightly above average, I’m not sure this team is beatable.

Why will Duke win the National Championship?

Rivera: Jahlil Okafor. The freshman is unstoppable. Averaging 17.5 points per game this season, Okafor is bound to bounce back from a few mediocre performances in the NCAA Tournament. At 6-foot-11, Okafor can help Duke match up with Kentucky. In addition to Okafor and his ability to score, the Blue Devils’ offense is lethal, with players able to score from anywhere on the court.

Why will Michigan State win the National Championship?

Everson: Last season saw a seventh-seeded Connecticut team battle through the tournament and cut down the nets as an upstart Kentucky squad looked on. Now, can number seven seed Michigan State overcome even greater odds with senior Michigan State guard Travis Trice playing the Shabazz Napier role as the senior who’s getting hot at just the right time? The oddsmakers say no, but I’m not so sure.

Why will Wisconsin win the National Championship?

Hammond: Wisconsin has possibly the best starting five of a team not named Kentucky. The Badgers do all the things championship teams are supposed to do — they rarely turn the ball over, they rebound and don’t waste scoring chances. Plus, Wisconsin was just a few seconds away from beating Kentucky last season. So, it should be no shock when Wisconsin is cutting down the nets on Monday.

How can Wisconsin upset Kentucky?

Rivera: Copy what Notre Dame did. Simple, right? Well, not really. Kentucky is a team with height at every position. Wisconsin has to be able to outwork the Wildcats near the basket and take away the second-chance opportunities that junior Willie Cauley-Stein and freshman Karl-Anthony Towns often see.

Another easy way to limit Kentucky scoring the ball is to not turn over the ball and give up uncontested baskets. If the Badgers rebound the ball well and limit turnovers throughout the game, they could force a contest.

Is Michigan State head coach Tom Izzo one of the best tournament coaches of all-time?

Everson: He is definitely in that conversation; however, I am much more open to saying one of the greatest in the expansion era of college basketball (from 1985-present).

The Spartans have been to 18-consecutive NCAA Tournaments. In those 18 appearances, they’ve been to 13 Sweet 16’s, nine Elite Eight’s, seven Final Four’s and won one championship in 2000.

Maybe this is the year Izzo walks away with his second NCAA title, but with the damage he has already done, a place is definitely cleared in the Hall of Fame for one of the most consistently great coaches of the last 20 years.

What one player from each Final Four team should people be watching for?

Kentucky — For Kentucky, I’m not sure there’s one player to watch. What I’m going to look for is that next five coming off the bench. Wisconsin, Duke and Michigan State can all do enough to knock the Wildcats on their heels. If Kentucky can get the bench production its gotten all season, it could be lights out and 40-0 for the Wildcats.

Wisconsin — Sophomore Nigel Hayes will be a huge factor for Wisconsin on Saturday. We already know what junior Sam Dekker and senior Frank Kaminsky can bring to the table, but when Hayes is in on the act as well, it’s hard for anybody to compete with Wisconsin.

Duke — Freshman Justise Winslow. After a rough end to the regular season, Winslow has been huge in Duke’s tournament run. His impact on the game could very well determine how long Duke stays in Indianapolis. 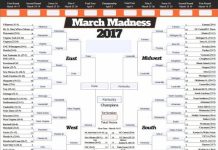 If money could buy an NCAA Tournament championship, Kentucky would beat Duke