For decades, private schools have been offering single-sex grade schools, high schools and colleges. Today, many people think that this form of education is outdated. According to the Women’s College Coalition, there were only 47 women’s colleges in the U.S. and Canada in 2014.

There can be an argument made either way against the single-sex education model. It doesn’t really matter either way, as long as the decision to attend such an institution is still up to the student and their family.

Students that have gone through the school system in co-educational institutions won’t fully understand what it is like to learn in single-sex institutions and vice versa. Men and women can learn in different ways, but there is so much more behind it than just gender.

“Before weighing the pros and cons of single-sex education, consider the influences of ‘nature versus nurture,'” the article’s author, Kristin Stanberry, said.

There are many factors that affect each child’s learning profile. These include gender, temperament, abilities, disabilities and intelligence. Stanberry’s article adds that the way parents and society nurture a child can affect their learning style as well.

According to the National Association for Choice in Education, supporters of single-sex education have said they do not believe, “‘All girls learn one way and all boys learn another way.’ On the contrary, we cherish and celebrate the diversity among girls and among boys. We understand that some boys would rather read a poem than play football. We understand that some girls would rather play football rather than play with Barbies.”

Separating boys in one room and girls in another doesn’t accomplish anything. What does make a difference is having teachers and professors that use teaching techniques that are geared towards the gender of their students.

“Girls seem to favor learning in a quieter setting in which they work together and come to a consensus,” Robert Kirschenbaum, a school psychologist in Lakewood, Washington, said in the debate. “Boys tend to favor a setting that is more competitive, physically active and louder.”

Kirschenbaum said that research shows girls learn math and science more effectively when they are surrounded by other girls. They feel more confident and have more opportunity to participate without boys in the room, because they tend to dominate class discussions and get called on more often.

Andre Boyd, a teacher from South Carolina in that debate, said he disagrees.

“Perhaps the opposite gender could be a distraction for students in the classroom, but by grouping students by gender, we lose important elements of true education,” Boyd said. “In a diverse classroom, there are countless questions, different perspectives and a variety of interests, which all add to the excitement of learning.”

Some people might think that single-sex education does not allow students to properly socialize and work with those of the opposite sex. The real gap isn’t between male and female students, but rather between students of different racial, ethnic and socioeconomic backgrounds. Separating students by gender won’t solve any of those issues.

Single-sex schools won’t fix all the gaps between students. They aren’t for everyone, but neither are co-educational schools. There is no right or wrong answer to figuring out how students learn best. Every student is different and should have the opportunity to figure out what kind of educational system works best for them, whether that’s co-ed, same-sex, homeschool, public school or private school.

The argument doesn’t matter; how each individual student learns most effectively, does.

Courtney Burke is a senior in mass communications.

OPINION: What I’ve learned from going to college out-of-state 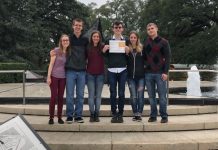 College Bucket List: See the world with a road trip

College Bucket List: See the world with a road trip