“Peter and the Star Catcher” opened up its tale Monday night in McCain Auditorium with a nameless orphan boarding a not-so-sturdy ship named The Neverland. Peter starts an unlikely friendship with a girl named Molly Aster when they realize they are in danger. The two kids race to save the world and keep “star stuff” away from the bad guy, Black Stache, who is hinted to later become the formidable foe Captain Hook.

The play is based on a novel of the same name by Dave Barry and Ridley Pearson. Barry and Pearson’s book serves as a prequel to the actual story of Peter Pan, “Peter and Wendy,” written by J.M. Barrie. It recounts Peter’s journey to the island that would eventually be called Neverland and how he became the boy who never grew up.

This presentation was part of a special arrangement with Music Theatre International and originally produced for Broadway. It attracted people of all ages from the surrounding community. Marie Stanton, Manhattan resident, and her husband used their McCain performance series tickets to attend the show.

“Well, we have tickets for different events and this is the one we picked,” Stanton said. “It was a really fun show.”

While some attendees were simply using up tickets, others were excited for the show since it was announced as part of the series. Shannon Madden, senior in humanities, said she has been eager to see the show

“I’ve wanted to see this (show) since its been on Broadway in New York City,” Madden said. “It won a Tony and I loved it.”

The show had audience members laughing, groaning and applauding at every twist and turn.

“I really loved the whole second act,” Ivy Calvert, junior in vocal performance, said. “The part when Black Stache gets his hand cut off in the trunk and he goes through this long rant of ‘Oh my god,’ he breaks the fourth wall and jumps off the stage.”

The cast pulled the audience through an assortment of emotions.

“I thought it was hilarious and heartwarming, and sad and happy,” Kati Krieg, senior in English, said. “It was everything.”

The cast left no emotion hanging. They swept the audience off their feet up until well after a standing ovation. The crowd left with a better understanding of how Peter Pan came to be before he was the boy who lived and fulfillment in their hearts.

“It was like an emotional roller coaster, but it still made you feel complete when you left the theater,” Madden said. 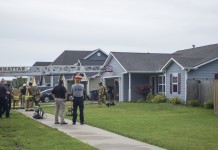 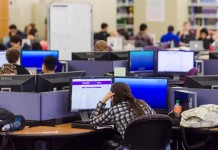 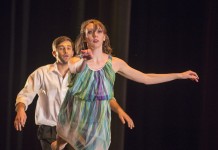