Hundreds of thousands of people flocked to the notorious Woodstock music festival in the late 1960s, where music lovers enjoyed performances from artists like Jimi Hendrix, Santana and The Who. As Woodstock went down in history as the most famous music festival of all time because of the high attraction and wild antics, music festivals became affiliated with the free-spirited, drug user stereotype.

“I think the stereotype makes it sound like there are a lot of hard drugs and people passed out, but that’s definitely not the case,” Bourk said. “Everyone is there for the same reason. People are there for the music so they want to have a buzz or whatever to enjoy it more, but it’s all about the music, not the drugs.”

Just because some people make personal decisions to portray the music festival scene in a negative way doesn’t mean all festival-goers are like that or should be affiliated with illegal activity. Safety is a main concern for some, but how safe a festival is depends on what kind you are attending and the precautions you choose to take beforehand.

Jamie Brower, junior in geography, attended Coachella Valley Music and Arts Festival in 2013, and said he noticed a variety of participants.

“Festivals are stereotypically associated with wild young adults, but I saw a lot of older people enjoying the music as well,” Brower said. “In general, festivals are safe. People go for the music and pay a lot just to get in. Of course there are the bad apples, though.”

Fashion is also a topic encompassing modern day music festivals like Coachella, where the so-called “festival style” came from. Retailers like ASOS, Urban Outfitters and American Apparel even have “Festival Fashion” as its own category to shop from for their customers. When denim shorts, head crowns, crotchet tops, floppy hats and graphic tees are paired in the right combination with the right amount of skin coverage (as opposed to people hardly wearing anything), festival style is something that can be pretty freaking awesome. Natalie Matthews even mentions in her Elle Magazine article “Celebrities’ Best Music Festival Looks Ever,” that “…concert style is quickly crystallizing into its own look.”

Although the hype and style can overcome the stigmas surrounding music festivals, let’s focus on what is really important: the experience.

“I like going to music festivals, because I get to be with friends outdoors and am able to listen to live music, which is so much better,” Darger said. “Music festivals are such a fun atmosphere where you can dress up and kind of do what you want.”

So forget what you’ve heard, because music festivals are really about giving those who have an immense appreciation for music a chance to see multiple artists live within a short time period. Festivals are just outlets for music-lovers to express themselves through music. They dedicate their time to a weekend event of exposure to a whole new culture of diversity and performing artists.

Before stereotyping music festivals, realize that maybe each person is just trying to express their individuality and find a common interest with the other people attending. 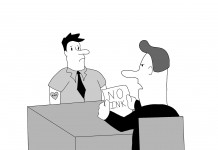