Yesterday, the K-State Center on Aging held the third annual Personhood and Dementia 2015 Workshop at the K-State Alumni Center. At the workshop, students learned about Alzheimer’s, dementia and the families whose lives these diseases touch.

Alzheimer’s is the sixth leading cause of death in the U.S., and someone develops the disease every 67 seconds. One in three seniors dies with Alzheimer’s or another form of dementia. Alzheimer’s cannot be prevented, cured or even slowed down, according to the Alzheimer’s Association 2015 Alzheimer’s Disease Facts and Figures.

According to the Alzheimer’s Association, Alzheimer’s is the most common type of dementia, a general term used to describe a decline in mental ability that is severe enough to interfere with everyday life. This disease, though, interferes with more lives than just the person suffering from dementia.

Gayle Doll, director of the K-State Center on Aging, presented at the beginning of the workshop. The workshop focused on those affected by the disease and how it affects everyone individually. There is no road map or recipe that any certain person can follow to treat someone with the disease. Every person suffering from a form of dementia, like Alzheimer’s, is at different stages, and they need to be treated as such.

The Alzheimer’s Association lists 10 signs of the disease, including memory loss that disrupts daily life, challenges in planning or solving problems, difficulty completing familiar tasks, confusion with time or place, trouble understanding visual images and spatial relationships, problems with words when speaking or writing, misplacing things and being unable to retrace steps, decreased or poor judgement, withdrawal from social or work activities and changes in mood or personality.

Sally Bailey, director of graduate studies in theatre and director of the Drama Therapy Program, did an activity to simulate the interaction between residents and the people that care for them. A discussion was then held by a panel of those diagnosed with Alzheimer’s or other forms of dementia.

“I thought they were brave, and I think it’s pretty rare to see somebody that celebrates the fact that they have Alzheimer’s,” Doll said.

Brenda Hallauer, resident of Manhattan, has a 96-year-old mother that lived with her for the past eight and a half years before moving to Sloan House, one of many different housing options for residents at Meadowlark Hills Retirement Community. She said that listening to the panel was very interesting.

“I’ve been on this journey for a lot of years now, and I know quite a bit about it, but I wanted to learn what their aspect was,” Hallauer said.

David Babcock, “The Knitting Runner,” taught his finger-knitting technique after the lunch break, which he used to break the Guinness World Record for the longest scarf knitted while running a marathon in 2013.

Babcock wanted to give back to those affected by Alzheimer’s. He said he decided that he would give one of his famous scarfs to anyone who shared their stories about how they have been affected by the disease. Babcock became emotional as he shared stories on the Lion Brand Yarn Company website, who support and fund him.

According to an April 21, 2014 Washington Post article titled, “Might crafts such as knitting offer long-term health benefits?” a 2012 study conducted by the Mayo Clinic found that those people engaged in activities like crafting, playing games, computer activities and reading books were 30 to 50 percent less likely to have mild cognitive impairment than those who didn’t.

The workshop also featured presentations by Karen Stobbe and her husband Mondy Carter, who both wrote and performed the two-person performance titled, “Sometimes Ya Gotta Laugh.” Stobbe is also the director of “In the Moment,” a program that helps train caregivers dealing with the effects of Alzheimer’s and dementia on their loved ones.

“I just hope to take away from it learning information for caregivers and just hearing people’s stories, and I’m just really interested in aging also,” Klaus said.

Doll said that this year’s conference focused less about the biological aspects of Alzheimer’s and focused more about how to help people living well who have the disease.

“I think everybody knows somebody with dementia, but few of us try and get into their inner-worlds,” Doll said. “I think that we had some presentations today that were really successful in showing us what it’s like to have dementia and what people with dementia can benefit from the rest of us.” 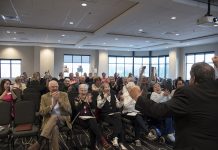 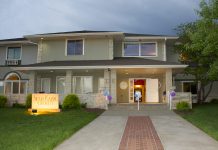