Let’s imagine you’re at a job interview and they ask the dreaded question “Can you tell me something unique about yourself?”

This question is followed by instant panic. Do they want to know about the time I fainted in my biology lab? Should I play it safe and mention that I can marathon a show on Netflix for three days nonstop? What do I say?

It turns out there’s a unique skill you can bring to the table, which will not only answer the question but make you more likely to get the job: being fluent in a foreign language.

The benefits also extend far outside the walls of your language class. According to an Oct. 25, 2013 Montana Public Radio article titled, “The Important of Learning Foreign Languages,” learning another language can improve students’ mental focus, reading and writing abilities and even improve math skills. If you just aced a calculus exam, you might have your French class to thank for that.

For the ultimate unique experience, a semester abroad can impact a student’s resume greatly, and being able to speak the language of the country you are in will make your experience that much better. Studying abroad is on the rise; about 700 K-State students studied abroad for the 2013-2014 school year.

Courtney Cox, sophomore in mass communications, said there’s nothing like taking on a foreign language to teach you to prioritize. She is currently enrolled in Spanish III.

“Just the fact that it’s four days a week … and you’re not used to going to class that much,” Cox said. “In my class, she assigns something everyday, which by itself isn’t that much, but when you pair it with other things, you have to think different. You have to think in a foreign language.”

Cox said she thinks her hard work will be worth it.

“When employers are looking at two people and one of them can speak a foreign language; they’re going to choose that person, and it’s nice to have that advantage,” Cox said. “It’s kind of your saving grace.”

It’s certainly not all hard work and no pay. According to an Oct. 13, 2013 CNN Money article titled, “The hottest job skill is…,” fluency in another language is one of the best and more valued skills a person can have. Between 2010 and 2020, the Department of Labor estimates that roughly 25,000 jobs will open up for interpreters and translators.

“As a vocal performance major I felt extremely fortunate that K-State offered Italian,” Moore said. “Many of the most well-known operas are in Italian.”

Success in a foreign language can come down to having an excellent instructor, and Moore said she feels lucky in that regard.

“Having now taken three semesters with Professor Renner, I am finding that learning Italian arias is much easier,” Moore said. “Not only have I gained pronunciation skills, but also I actually know what I’m singing about. Being able to instantly understand the text on the page allows me to connect with what I’m singing about and gives me a better chance of conveying that message to the audience.”

Despite the advantages of knowing another language, the road to fluency is certainly not an easy one.

“Learning a foreign language is more than just taking a class,” Moore said. “Instead, it is an opportunity to gain skills that I will apply in my career everyday.”

Speaking a foreign language allows you to expand your horizons and will likely help you snag your dream job. 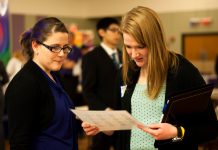 Got an interview? Here’s a few tips and tricks to make a good impression. 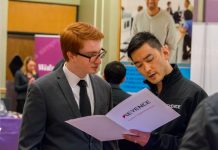 Interviews can be stressful. That’s where the Career Center comes in.

Interviews can be stressful. That’s where the Career Center comes in.