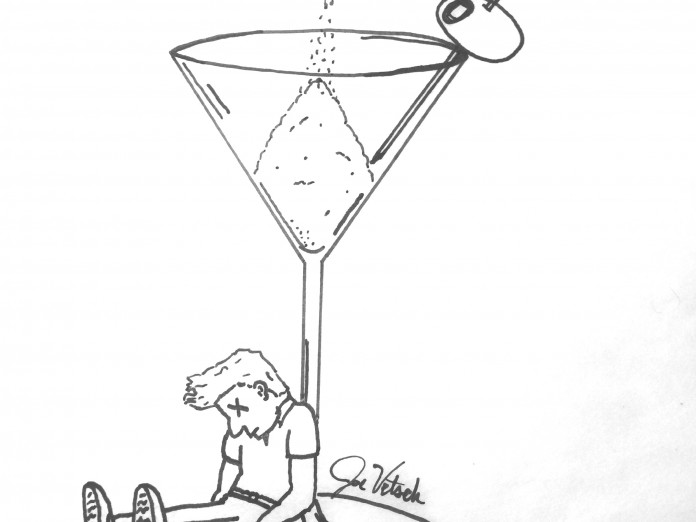 Students are always finding inventive ways to get messed up. Binge drinkers have taken Aggieville by storm. People are actually choking one another until they pass out. Don’t forget that some mix narcotics with alcohol, just to see what happens.

Let’s face it: students are stupid when it comes to getting stupid. When I heard about the uproar around a new powdered alcohol, I wondered if this was just another way to get annihilated faster.

Mark Phillips came up with the powdered form of alcohol, aka Palcohol, that could be mixed with water in 2012, according to an April 3 New York Times article titled, “Powdered Alcohol Meets Resistance in U.S. Before It Even Comes to Market.” Phillips isn’t the first person to come up with the idea of alcohol in something other than liquid form; it has also been produced in Europe and Japan. Although Phillips’s version was approved for sale last month by the Alcohol and Tobacco Tax and Trade Bureau, it is still subject to state regulation.

Palcohol is not dangerous, it’s magic. “Imagine a Margarita on a counter. And then imagine if you could snap your fingers and it would turn into powder. That’s Palcohol … without the magic. Palcohol is just a powder version of vodka, rum and three cocktails … with the same alcoholic content,” according to the product’s website.

If I have the option of drinking magic over my usual cheap, tropical flavor Burnett’s Vodka, you bet I am going to pick Palcohol. Society, however, has been quick to jump to mixed conclusions about the new mixed drink. What are experts saying, though?

According to the National Conference of State Legislatures, six states have passed legislation to ban the powdered alcohol outright, including Alaska, Louisiana and South Carolina. Sen. Charles E. Schumer of New York wants the product banned as well, and he introduced a bill last month that would ban its sale and manufacture nationwide.

While some states are flurrying to their offices to spit out bills that would ban the sale of Palcohol, others are embracing the idea. According to a March 31 NPR article titled, “Colorado Allows Sales Of Powdered Alcohol,” Gov. John Hickenlooper signed a law permitting the sale of Palcohol. Colorado seems to be the trendsetter when it comes to recreational substances.

There are some concerns with the product. For one, it’s powder. Inevitability, someone is going to try to snort it. Cocaine is one of the most popular drugs to snort. According to the National Institute on Drug Abuse, the high from snorting cocaine may last anywhere from 15-30 minutes. While it is not fair to compare cocaine and Palcohol, it could be concerning to some that those who do choose to snort the powdered alcohol will get a shorter high or buzz, and will probably snort more to compensate.

The website originally suggested that snorting the powdered liquid would get you drunk faster. Phillips has since retracted that statement, going as far as snorting the product himself to prove that this wasn’t the case.

In an interview with the New York Times, Phillips said, “It would take you an hour of pain to ingest the equivalent of one drink. It really burns.”

Another issue that has been brought to light with Palcohol is that it would be much easier to spike a drink with it. People who intend on spiking drinks are going to do so, regardless of the texture of the alcohol. It would be just as easy to put a flask in your pants as it would be to put powdered alcohol in a similar container, right? The issue isn’t the substance, rather, the person who plans on spiking someone’s drink in the first place.

While I have not tried Palcohol, I don’t think those desperately trying to ban it should worry. Those looking for a high will find a controlled substance no matter what, whether it be Palcohol, cocaine or another narcotic. While I may be hesitant to try the product, I don’t think it’s fair to let fear drive the bans surrounding this new drink.

Instead, people in power should be putting more of their time, money and effort into recovery programs for those who may be suffering from an addiction. Let’s stop wasting our time here panicking about the next new drug, and figure out how to help those we are afraid will abuse it in the first place.