Rebuilding — a term that describes what the K-State football team is trying to do this offseason and especially during spring practices. The Wildcats are attempting to replace many key figures from 2014’s successful season, on both offense and defense.

While the team has lost a number of impact seniors to graduation, one position has remained steady with a solid core of new seniors: the offensive line.

But even with four seniors who have experience in the trenches, the Wildcats are searching for further depth on the offensive line.

“Always trying to create a two-deep in the offensive line, for us, has been really an issue,” K-State head coach Bill Snyder said Tuesday. “You can really go back, probably forever, and we might have seven or eight guys that are prepared to get on the field, and so our guys have to play a a lot of positions.”

While injuries are never celebrated, the knock to senior guard Boston Stiverson during the Alamo Bowl just a few months ago does open up significant practice time for other Wildcats.

While Stiverson is in no real danger of losing his starting position on the field — barring any delays with his recovery or any magnificent showing from his replacements during his absence — K-State has a chance to see a number of newcomers in his place during the spring.

“Because of Boston (Stiverson’s) injury, we have guys jumping in there and getting some reps with the No.1’s, which does nothing but help them,” Snyder said.

Depth is one issue, but K-State’s real roadblock came with the departure of 2014 Rimington Trophy finalist and three-time All-Big 12 center B.J. Finney. The three-year captain, who started all 52 games of his career after being redshirted, was the steady rock of the offensive line who also provided the leadership for the entire team.

Snyder and his staff seem to have two guys pegged as Finney’s replacement at center: sophomore Reid Najvar and redshirt freshman Dalton Risner. Both players could provide long-term stability to the program in the exact same way that Finney did over the last four years.

“Well, Najvar and Risner are the two that have taken the biggest steps,” Snyder said. “Right now, Risner is working with our No. 1’s as a redshirt freshman. I like what he’s doing; he’s a very competitive young guy.”

With Risner seemingly the favorite through two weeks of spring practice, he has the same unique opportunity that Finney did at the start of his career, which is being able to come off a redshirt season and provide immediate reps with the starting line.

Risner, a Wiggins, Colorado product, is still trying to fit into the system and understand the comprehensive schemes and assignments that he will have to deal with as the center, just like any other new face in the program.

“(Risner’s) going through that ‘processing information and making calls stage,’ (but) nobody works at it any harder than he does,” Snyder said. “He’s got physical skills as well and a high degree of toughness to him.”

The good news for Risner — Najvar too — is that time is on their side, and a willingness to learn under Snyder’s staff has shown positive results come August.

“It’s obviously a big learning curve; the center position has really got to be in charge of that offensive line and really know his stuff, he has to tell everybody else what they’re doing,” junior quarterback Joe Hubener said. “Overall he’s (Risner) done really well with putting the snaps at where their supposed to be. He’s really trying to take command at offensive line and be a leader.” 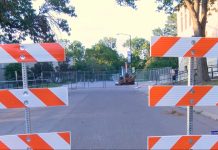 Channel 8: The Multicultural Student Center should be done by fall 2020