K-State students and staff face increases in parking permit prices for the 2015-2016 school year to offset Parking Services’ budget deficits. The Council on Parking Operations held an open forum Thursday in the K-State Student Union to inform the public of the proposed increases.

Students face a $10 increase for all parking permits while staff permit price increases are dependent upon their category. Those in the FT1 group will see a $5 increase while those in the FT2 and FT3 groups face $10 and $15 increases, respectively.

Other permits, such as service, vendor and government, will also see price increases. Daytime garage access will increase from $10 to $30.

“No one likes to have rates increased and to pay more,” Brooks Hetle, resident life coordinator for the Department of Housing and Dining, said. “But we are getting to the point where that is inevitable. And we do need extra revenue to help pay for a lot of things.”

The additional revenue is estimated to be $156,000 per year. It will be used to offset the $300,000 budget deficit in Parking Services.

According to data provided by Cindy Bontrager, vice president for administration and finance, Parking Services had a $4 million revenue and a $4.3 million expenditure in fiscal year 2014.

“If you look at those total expenses, we have been spending more than what we bring in every year and we have been drawing down that cash balance over the years,” Bontrager said. “Now we’re still okay, we’re still meeting bond requirements … but we can’t continue to sustain that.”

“Parking in itself is self-supporting,” Bontrager said. “There’s no funds coming from the campus, no tuition dollars, no state funding going in to help support it.”

“What’s being proposed here is only to help with the operations,” Bontrager said. “It’s not to start funding new parking lots or anything else. It’s only to help make sure parking … gets back into the black … We don’t want to start building reserves again. We want to really hold steady until we figure exactly how we’re going to be moving forward.”

Fines will not increase for the upcoming fiscal year, but the council plans on increasing fines for the year after that.

“We are not changing those this year,” Darwin Abbott, director of Parking Services, said. “We are trying to break it up instead of having a mass overhaul of everything in one year. We are looking at doing those next year.”

In the future, Parking Services will look to the campus master plan for 2025. Hetle said that Parking Services wants to provide maintenance for existing stalls, add new stalls and embrace a “culture change” that includes a shuttle system and other forms of transportation.

An additional parking garage would add 1,600 stalls at a cost of $24 million. Hetle said possible locations include north of the Derby complex and the Edwards Hall area.

The current garage has another 25 years until the bond is paid off.

People in the audience expressed concern over the finances of the parking garage. The council said that the garage does not fund itself.

“The parking garage is being supported by all the other lots,” Abbott said. “It doesn’t stand on its own.”

Abbott and Hetle gave estimates for how many parking stalls have been and will be lost to construction. The master plan calls for a total of 4,696 parking stalls.

Hetle said that the shuttle service will be phased in over time. Cost estimates include $347,000 per year for the campus circulator, $783,000 for peak service and over $10,000 for each bus stop.

“We’re still trying to get our arms wrapped around how (the shuttle service) is going to happen,” Bontrager said. “There’s a lot of questions and not a lot of answers yet.” 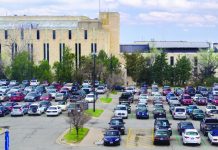 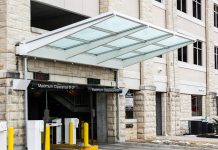