Nationally, greek organizations focus on philanthropic endeavors. At K-State, this is evident in the work done by various members of the 12 panhellenic council sororities and 25 interfraternity council fraternities.

“I think the impact is huge,” Paul Meissbach, Interfraternity Council president and senior in applied music, said. “I think that between local and national interests besides just the money given, it’s the attention and the recognition that those organizations get.

One successful philanthropy events is hosted by Kappa Delta sorority. The Shamrock Shootout features a basketball tournament and an all-you-can-eat event in the evening.

Local businesses and sponsors donate food and raffle items to help increase the amount of money the sorority raises for the Manhattan Crisis Center, a shelter for victims of domestic violence, and the Prevent Child Abuse America organization.

“I think this event is important because it’s open to K-State students and the whole community of Manhattan,” Katie Proctor, KD’s philanthropy chair and sophomore in athletic training, said. “Yes we raise a lot of money, but we also raise awareness for the community about child abuse and let them know what’s going on.”

Just two years ago, Delta Upsilon fraternity began a new philanthropy event, the Miss K-State Competition. In its first year, the event raised almost $4,000 and has continued to grow since. Twenty women are selected from sororities and campus organizations to compete for the title of Miss K-State by showing of their talent, spirit and intelligence.

The event benefits the Global Service Initiative, the international DU philanthropy, which sends members of the national fraternity to developing nations to do community service projects. The GSI’s domestic component focuses on Washington, D.C.

“All the money that we raise goes to buy supplies for DU’s to build schools and provide services to communities like in Jamaica and urban Washington, D.C.,” Michael Emely, DU philanthropy chair and senior in accounting, said. “It’s a great way to align ourselves with the values of our national fraternity.”

Individual members also do a great deal of work for the Manhattan community. According to Panhallenic Council Director of Community and Internal Relations Jessica Van Ranken, sophomore in political science, women in sororities recorded 36,449.05 hours of community service in 2014 and the number has seen continual growth in the past several years.

While some chapters require their members to do a specified amount of hours, most encourage members to be involved and give back to the community. Across the nation, the National Panhellenic Council reported that sorority women recorded 639,021 hours for philanthropic efforts and 908,905 for community service projects in 2011.

“I think the type of people that we recruit to be greek members at K-State are already service-oriented and we provide the structure and outlet for them, but it’s already something that we look for in members,” Meissbach said.

One important factor to the greek community, at K-State and nationwide, is a dedication to serving other. Several organizations list philanthropic interest as one of the criteria for membership and community service hours are recorded monthly. One day of K-State’s formal recruitment process is even focused entirely on sororities’ explaining their particular philanthropy to women going through the recruitment process.

“I think that getting out and giving back to the community is important,” Meissbach said.” We need to do more than just live in Manhattan, but give back to it. It’s more than just the requirement, it’s the sense of giving back and a mutual relationship.” 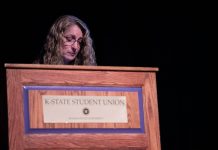