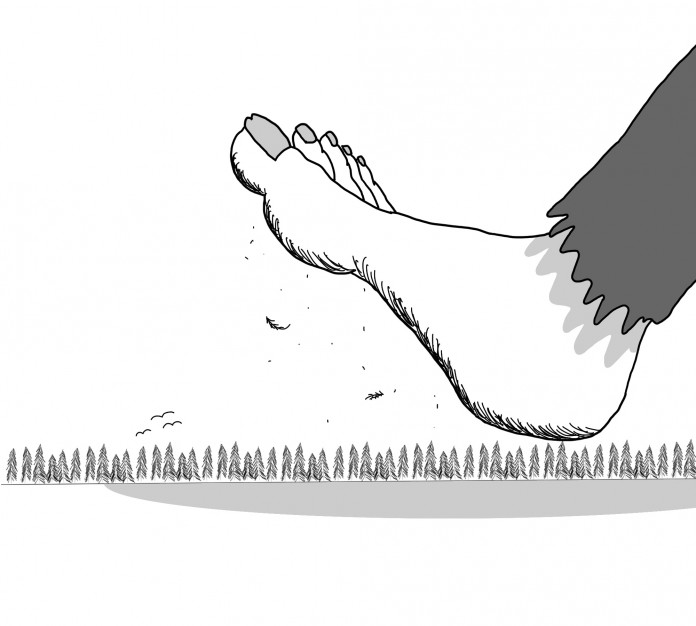 I have relatively large feet. There are some positives to this unique physical feature, such as keeping my friends’ size 8 shoes away from my closet. There are negatives as well, including deciphering the stumped look of a salesperson trying to shove my arch into a shoe that is entirely too small. Are you out of this style, or does the size of my feet thoroughly surprise you?

While I am not embarrassed of my large footprint, I can’t say the same of my ecological one. I’ve neglected to carpool when the opportunity rose. I have recklessly grocery shopped, leaving with only half of the items on my list and fistfuls of plastic bags cutting off my circulation as they inch up my arms.

Earth Day is tomorrow, and last year K-State celebrated with a week filled with activities revolving around Earth Day awareness, including a recycling demonstration by Students for Environmental Action and an Eco Fest Lecture Series presented by Engineers Without Borders.

You don’t have to be a non-showering, vegan-eating, animal-loving hippie to realize we are screwing up our planet, and we need to slow this rapid decay.

There is no reasonable evidence to suggest that putting restrictions on or completely banning plastics bags will result in lower costs for sanitation services, according to a December 2013 National Center for Policy Analysis report titled, “Do Bans on Plastic Grocery Bags Save Cities Money?” But while we may not see any savings, we would certainly see less ghost-like plastic bags hitchhiking along most of the roads we drive on.

Plastic grocery bags aren’t the only way we’ve been irresponsible with plastic. Some, however, are trying to correct their biological impact. According to an April 13, Boston Sun Times article titled, “Brookline Proposed to End Water Bottle Sales,” Brookline, Massachusetts has followed in the small, ecological footsteps of San Francisco, the first major U.S. city to ban the sale and distribution of plastic water bottles on city property in early 2014.

The proposal, if passed, would require anyone attending festivals held in town, and everything on government, school and public ground to provide their own water bottle if needed. The idea of the ban is to “limit the environmental stress brought on by the use of plastic bottles, while also forcing local eating establishments to offer tap water to its customers.”

OK, so we will still have to worry about sports drinks, flavored water and everything else in-between, but wouldn’t it be nice not see water bottles hanging in their usual cliques on the edges of shorelines? It might also force people to drink more water, which we don’t do enough of anyway.

One tip for staying hydrated is to keep water bottles in places like your car, work, in a gym bag and even all over the house, according to a U.S. News and World Report Health article titled, “How to Drink More Water Each Day.” If all the water bottles laying around your house were plastic, however, it’d make it much easier to simply throw them away and forget about the more than half a gallon of water you need to drink daily. I think people would make a much more conscious effort to drink water if they just invested in a reusable water bottle.

Restrictions and bans aren’t the only efforts being made in hopes to be rid of plastics altogether. Some states are even charging for every plastic bag used. While this may force some college students to walk out of a grocery store cradling a week’s worth of groceries in their arms, it is not fair to those who may not have a few dollars to spare to have to purchase plastic bags every time they need to go food shopping.

Instead of plastic bags, we could turn to durable, reusable ones. They make groceries easier to carry, because you don’t have to worry your bag ripping open from stuffing it too full with groceries. It would drastically lower the number of single-use plastic bags being used daily.

So what would actually happen if we stopped using things like plastic bags and water bottles? Unfortunately, the only evidence we have gathered are from cities like San Francisco who are attempting to trailblaze the anti-plastic path to a more eco-friendly earth. It isn’t about the products we use or the ones we place government restrictions on; it’s about making a conscious effort to stop stomping your enormous Sperry Top-Sider’s all over the planet.

Tomorrow, I challenge every one of you to walk to campus instead of drive, to wash your dishes by hand or to not litter. States can put restrictions and bans on as many products as they want, but we can see how successful government bans are in things like prohibition, which didn’t slow any liquor drinker down. While I think that these rules can act as a road map, only we can guide ourselves to living an eco-friendly life.